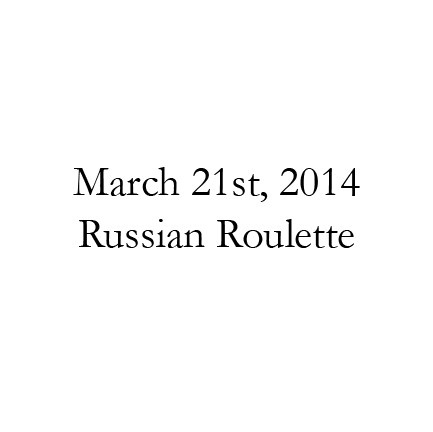 He typed his username and password, logging in to check the numbers in his bank account with the same anticipation that one might have when sitting down in a dentist’s chair, seconds after the dentist peers into your mouth with their first instrument.

With $5.00 in the savings account, in case he spent everything and needed to buy a subway card round trip.

He quickly transferred the five dollars to his checking account, and logged off, as if the money would disappear slowly with each second of looking at it.

He checked the restaurant menu again.

Each meal that night was a fixed price of $70.00. An insane amount for a dinner, he thought, but this was different. This was for her.

She was subtle and beautiful and had a lethal dose of unassuming eagerness that she carried like a revolver used in a game of Russian roulette – and every time she said a word to him, she’d spin the barrel and he’d hope that when he opened his eyes they would both still be there.
That was the only thing he wanted – For them to both still be there at the end of the insanely priced dinner. And with the very last 158 dollars and 17 cents in his bank account, he took the wager that they would both survive the risk of her revolver.

But he wasn’t going to go into a wager with such high stakes without rolling a loaded die. He shined his shoes until he could see his reflection; he pressed his shirt until it was crisp and smooth as a sheet of Fedrigoni. Before he left his apartment, he took one last look in the mirror, so that if he truly didn’t survive the evening’s game of Russian roulette, he would remember what he looked like before the traumatic gamble.

The entrance to the restaurant that was poised to empty his bank account was almost as subtle and unassuming as her beautiful inherent smile – and though the overly priced meal lacked nothing, he tasted none of it. The rich, savory wine; the smooth salt that glazed the main dish; the warm, fluffy, freshly baked bread; the deep, creamy dessert turned to nothing but grey, dull ash in his mouth as all the flavors struggle and failed to vie for his attention.

By the end of the meal, they had both eluded every bullet throughout the dangerous game.

He paid with his debt card, and his account dropped from $163.17 to $2.06. He walked to work the next day to avoid the subway fees. He ate only bread and drank only water for the next two weeks to keep from buying groceries. And when the end of the month approached like a honking taxicab, he pawned his bike to pay for rent.

And even though he knew he didn’t have to do it, and that he would be accused of trying to buy her smile, and he was buying into the whole clock-work machine that was built on the idea that one could buy love for the price of a dozen nice dates and a ring, he did it anyway, because he loved her.

And it was worth it.