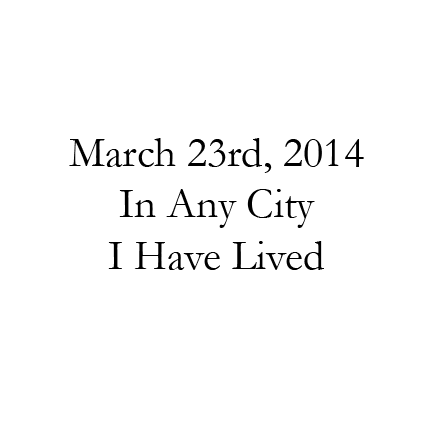 In Any City I Have Lived

In any city in the world, whether it’s large metropolis or tiny village, or new or aged or poor or rich or anything else, there is no limit to the bounds of diversity. You might disagree with me, because you might live in a city where everyone pretty much looks and acts alike. But underneath, everyone is different.

There are people who don’t know what the hell they are doing, but maybe, if you give them a little bit of love and let them borrow your detergent, they might figure it out.

I ran down the five floors of my apartment to the Laundromat owned by that Chinese man who always looks at me like I’m doing something wrong. He was probably right, and I probably deserved that look, but I didn’t like it, nonetheless. After cramming all of my clothes into a washer that was slightly too small and shoving the quarters into the slots, I started the machine. I hastily grabbed my detergent, only to discover that I had about enough detergent to appropriately wash a sock. Okay, maybe a pair of socks.

I stood there, imagining how the stench from my exercise clothing would infiltrate the meager threads of all of my other clothing and how I wouldn’t have a chance to rewash them for another week (which meant that all of my clothing for the next week would smell faintly like I had just run three miles in them).

I glanced around the Laundromat, hoping that an easy and viable solution would freely present itself. It didn’t. Instead, I was greeted with the Chinese man’s scolding glare.

I slowly started to wander to the door, wondering whether I should run back up the five floors to my apartment, ‘borrow’ my roommates detergent, run back down the five floors, and add detergent to the second cycle (which, of course, is supposed to be for powder detergent, not liquid). Needless to say, I was not in the mood for that amount of cardio.

I passed a woman who sat in front of another washer, waiting for her clothes to finish spinning. For a moment I considered asking to pay for some of her detergent, but my feet kept on walking and took my out of the Laundromat. I stopped, thought about it, and circled back, because after all, the worst that could happen was that she said no, and the best that could happen was that I wouldn’t smell like a musty gym all week long.

“Excuse me,” I said, “Would you mind if I paid to use some of your detergent?” I held out a couple of quarters, trying to show her that I was actually not trying to rip her off, steal her detergent, or ask for a handout.

“You can have it.” She said, smiling. “I’m done doing laundry, just waiting on it to finish.”

She offered it to me. I took it, and somewhat skeptically felt that there was indeed some detergent remaining in the bottle.

I hastily added the detergent to the second cycle (the one that was actually meant for powder, not liquid, which made me wonder if that was the kind of thing that would mess up the machine, and was perhaps the reason why the Chinese man who owned the Laundromat greeted me with a scolding glare every time I entered the Laundromat).

I checked my dryer, and realized that I had estimated the time incorrectly and that there were still eight minutes until it was finished.

I smiled at the lady as I left, ran back up to my apartment, then back down after eight minutes.

I as walked up the five flights of stairs, I thought about all the kinds of people in this city. People who are wasting their time, and people that are using it wisely, people that don’t even know they have time to waste. There are people who don’t know what the hell they are doing, but maybe, if you give them a little bit of love and let them borrow your detergent, they might figure it out.

I’m one of those people.