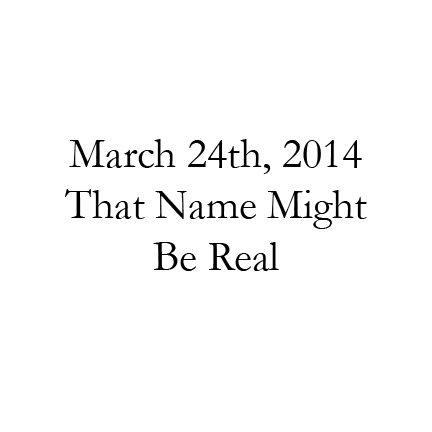 Every day when I wake up, there is nothing.

Nothing swarms around me. It grips me. It’s like swimming in a pool on a hot summer afternoon in the middle of August – the feeling you get when you’re sucked in and you feel the crash of the hot air engulf you and mix with the sweaty chlorine splash on your face. You shut your eyes, and for a split second, you’re nowhere. But it doesn’t matter, because when you feel the water swallowing you, and you feel yourself start to sink, your reality starts to sink into you.

When I wake up, that’s how I feel. I roll over, and I look at the note on my bedside table. Every night before I go to bed, I make a note.

A note with one name.

That’s it. One name. Just a first name, no last name. And no matter how far I feel like I’m sinking, and no matter how much nothingness is around me, for that day, I will always have that name.

I get up early, precisely five minutes before the sun rises. I drink one ounce of lemon juice – the kind that might remind you of the lemonade your aunt or uncle offered you on a hot August afternoon. I step out onto the back porch that faces east and I watch the sun rise. I go back inside, change my bra and panties, wash my face, shower and shave my legs, then wash my face again. I fill a five gallon bucket with scalding hot water and soak my feet while I eat breakfast because I heard once that it helps with circulation.

But when I close my eyes, there is nothing. All of this disappears, except for the name. The name is there, no matter how far I sink or how deeply the water swallows me.

I drive to work in silence. Sometimes the hum of my engine fades out into nothingness as well, but sometimes it just grows louder and louder and louder until I can’t hear anything else, and when it finally stops and I’m at work, the silence is deafening and frightening and begs for a scream to break it.

But there is no scream.

Instead, the stale, somber voices of anguished women drone on and out and burn with the kind of feeling that your lungs might have when you’ve been under water for too long.

And I think of that name. I can only think of one name each day, because if there were any more than just one, it would be too much.

About that one name.

They leave. And as they leave, I tell myself that I’m not sinking, further and further down. I get home and the sun has already set, but all I want is to know whether or not that name that I wrote down will be a person or whether it was just an idea that I had that I wrote on that scrap of paper right before I went to sleep. And before I fall asleep, I wonder if I can wake up the next morning and do it all over again, just like that feeling you might get when you jumped off the highest diving board and you start to wonder whether or not you have the guts to do it again.

I sink, deeper and deeper.

Closer and closer to nothing.

And I think to myself-