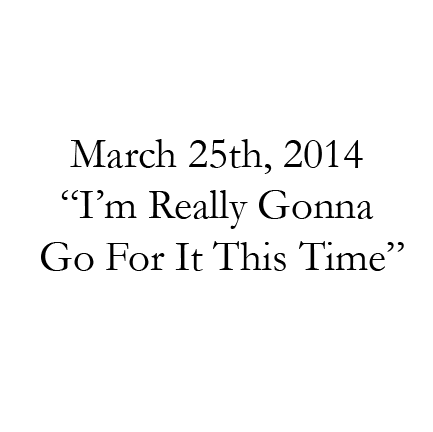 “I’m Really Gonna Go For It This Time”

The best way to describe him was ‘Teddy Bearish’ – and I mean that in the nicest sense of the phrase. He was huggable, round, and had a kind of grin that could have been a little weird if he wasn’t just so damn authentic and honest. He wore small rectangular glasses that fit well with the typical New York City banker type that he had fallen into, as if by accident. He didn’t appear to fit anywhere other than maybe an office cubicle or behind a bank window. But there was a cautious drive about him:

“Well, I sing, actually,” he would say, “I want to – Well, I mean, I feel called to be a professional singer, but I work at a bank to pay the bills. Been working there for fifteen years.” He would tell this group of friends. Had you seen us all together, he would have stood out among us as the odd one out – A round fifty-something year old man, tucked and tied with a collared shirt, khaki’s and a tie around his neck, among a number of thin young recent grads and twenty-somethings. I’m not sure how he got to be a part of our group, other than our group was a Bible study for artists and creative people, and as long as I’d been attending, he’d been attending too.

“I think I’m really gonna to go for it this time,” he would say, nodding his head profusely, as if to reassure himself more than anyone else. “I’m going to audition, so – you know. We’ll see what happens. I’m just leaving it up to God.” He drew the last words of each sentence out and leaned his head back ever so slightly, widening his eyes for emphasis.

We would, of course, join in the communal encouragement and be eager to hear about the piece that he was planning to perform. None of us had ever heard him sing, even though he would sing every week at the NQR stop on 49th and 7th in the mezzanine. In the corner of the back part of my mind, the proud and selfish voice that I had so carefully trained would consistently ask me questions which I stifled before I could even realize that they were mine:

“Why haven’t you done this sooner? You’ve been in the city for eight years, haven’t you? You’ve been working as a banker for even longer. And you haven’t auditioned yet? What’s stopping you from going out there and singing?”

But this voice in the back of my head never spoke loud enough to spend the time acknowledging it, until one evening as our weekly Bible study was coming to an end. I was trying to stay awake after a long day and a late night.

My head was starting to slowly fray, and I shut my eyes, listening to the discussion as I tried to rub the stress from my skull. Stephanie, Michael and Aaron circled and volleyed the discussion back and forth, touching on subjects from prayer, to God’s plan, to sin, and a plethora of other biblical terms and bible school buzzwords. As I slowly became more and more lost in my own headache, I heard the discussion circle back around the evening’s topic of prayer. Michael started to drone on about his prayer life.

A good Christian would have listened carefully and engagingly, but I’m not really a good Christian, and I let my headache absorb my full attention, as the discussion continued in the background.

But suddenly, the conversation went silent. I looked up. I looked around.

He was sitting there, shielding his face with his chubby fingers, holding back a flood of tears as if he was trying to hold in a violent sneeze. Slowly, the tears melted out of him.

We all looked at each other, wondering what in the world Michael had said to elicit this kind of reaction. But I knew.

What made that voice in the corner of the back of my mind think it had the right to look down on him? What was going to separate me from becoming just like him? Twenty or thirty years from this moment, would I be able to say that I tried harder than the chubby man sitting next to me? Or that I had gone out there and made myself vulnerable like a raw voice in an empty hall with no music to accompany it, and only a lonely echo to follow it? Or would I get drowned out by Q train, pulling in to the 49th stop on 7th avenue?

“Oh, goodness, I’m sorry guys,“ he sniffled through his silvery voice, pulled off his glasses, and grabbed some paper napkins sitting on the table. “I just – Sometimes we don’t ask God for enough.”

“Sometimes we don’t ask God for enough, but I’m gonna audition next week, and I’m really gonna go for it this time.”