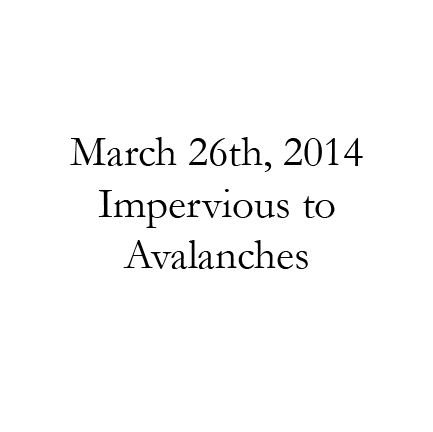 It’s the feeling that I imagine would engulf you if you were to somehow be frozen in the middle of a tidal wave or a tsunami or an avalanche – everything swarming around you while you stay immeasurably still. You could hear the violent rushing and maybe the screaming or maybe the roaring of the ocean trying to devour everything in it’s path, and you too, if you would allow it to – but you don’t.

I get this feeling when I hear an annoying acquaintance (or that person who would call me a friend, but I might have other names for) rave deliriously about that musician or that movie that I am by all measures of truth missing out on, and in turn, because I am missing out, am less of a person. Because I’m not caught in the same wave that they are in, I’m the one who is lacking enlightenment.

There seems to be no understanding that they might share of the idea that we are from different places, and on different types of terrain, and are going different places and are looking out for different things. The avalanche of culture that completely absorbs one of us may be completely incapable of even grazing the skin of the other.

This annoying acquaintance, whom I should more accurately refer to as a scalper, and who would refer to me as a ‘pretty good friend’, offered me a pair of tickets to see a musician. This musician in particular was one that he said was “the best band ever” and that I “would begin to live” once I had seen them in concert. For weeks and weeks after he’d discovered that I had never once listened to them he would repeatedly glare at me, puzzled, and comment on how I must be living under a rock to have this level of ignorance. I shook my head and laughed awkwardly and meekly, ashamed that I didn’t share the same culture. But on the inside I just puzzled back at him, wondering what I’d done and what my family had done so differently that I would end up untouched by this avalanche of relentless culture that had so completely swept him and so many others away.

‘Soulja Boy’, ‘Friends’, ‘The Price is Right’, ‘Sesame Street’ – Where had I grown up that I had scarcely once touched these waves, or let them touch me? I took the tickets that my friend offered me, because they were expensive, and they were front row seats, and the show was sold out, and everyone I knew wanted them. I think my friend – or, my scalper, I should say, offered them to me because he wanted me to experience these things. But I didn’t want to. I took the tickets because everyone else wanted the tickets, not because I wanted them.

So I went; I stepped into the avalanche willingly and cautiously. But I stuck out, unassimilated and awkward, like a sober person at a 21st birthday party. I had no business being there. Every wave of the tsunami swept through the crowd, and it reacted like a living, breathing organism- swaying and jumping to the rhythm of the music and the rhyme of the performers.

Had you looked down over the ocean of people that had all paid more than a hundred dollars to be part of this sweaty mass of a cult-like devotion, you would have seen a solitary person, still in the midst of an avalanche roaring around him.

I left the show with ringing in my ears, watching the survivors around me reel from the effects of the force of nature. I realized, slowly and then suddenly, like a wave, growing and climbing in size, that the people around me were looking out at me, in the exact same way that I looked out at them. Neither of us could reach the other, and neither of us wanted to. I could hear the violent rushing of music and maybe the screaming of the devoted fans or maybe the roaring of the guitars, trying to devour everything in their path, as well as me, too. But I couldn’t allow it to, even if I tried.