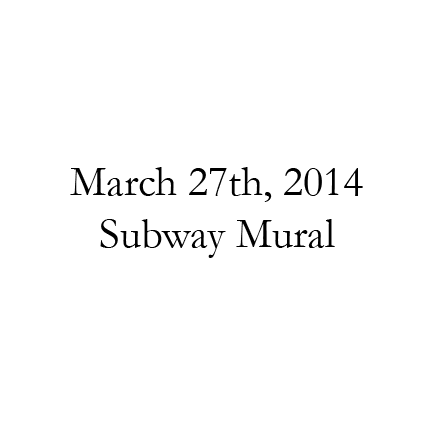 I stepped onto the subway, trying to avoid that awkward eye contact, while still managing to scan the crowd for familiar faces. Of course, there were none. I positioned myself by the door, looking out point blank at the cavernous tunnels that snaked in the underbelly of Manhattan. I pulled up my ancient iPod and pretended it was an engaging piece of recent technology. I queued up a ridiculously catchy cover of Elton John’s ‘Bennie and the Jets’ and let my mind sink rhythmically down the rabbit holes of the New York transit system.

My eyes lit up when I saw the mural animation painted on the side of the tunnel blur by at what seemed like a hundred and twenty frames per second, which was still too slow for most New Yorkers. The blobby characters melded and dripped from one shape to another as they danced through the small windows of the tunnel wall. The ‘Bennie and the Jets’ cover synced methodically with the strange 1960’s graphic design and presented a warped psychedelic image. Such a strange, stark image, and yet thousands and thousands of people passed it every day, not giving it more than a turn of the head. Maybe that was why I didn’t fit in New York – I tried so hard to find the importance and meaning in things that nobody else spared a second for – because maybe there wasn’t any. The mural was there because it was there, it happened because it happened. Maybe that impossible search is why I’ve stayed in New York as long as I have.

The painted animation ended and the train burst out into the bustling metropolis – I scanned the citified landscape jumbled together with bikes and bricks and taxi cabs. My eyes traced from the joggers on the sidewalks, to the cyclists in the bike lanes, to the apartment windows on the 17th floor that flew by.

My eyes raced through them, wondering what in the world it might be like to actually live in a luxurious apartment like that. My eyes shot into the apartments that had open blinds. An office space here, a kitchen there, a living room with an overbearing entertainment center and TV. I peered out the subway door window and absorbed the intricate details that made up the city.

My eyes split to one of the final buildings before the bridge. I scanned for windows and my eyes fell on a kitchen with a gaping window open. I watched as-

What the hell was that?

I turned white and the subway roared onward, across the Manhattan Bridge.

I looked around the subway car, shamelessly accepting all offers for awkward eye contact for the sake of camaraderie.

Did anyone else see that?

I yanked out my ancient iPod, visibly shaking, and stopped the Elton John cover that had suddenly become a soundtrack to a horrific scene.

In one of the large corner windows that we’d just passed, I saw a man slit the throat of another man in the split second that we happened to pass. In the fraction of a second that my subway door window aligned with the window that delivered the world to the luxury Dumbo apartment, blood splattered as a man sliced violently at another figure’s neck.

But it was gone – I shook my head and rubbed my eyes as if I was an actor pretending to wake up from a deep sleep. It’d happened like a flash of lightning or the amount of time that a New Yorker might spend considering the tunnel mural. I blinked rapidly and tried to lean and peer backwards, but the building, and the supposed violent crime, was long gone.

I shivered and looked around again. The blood drained from my face to the point where as I stepped off the subway an older lady actually asked me if I wanted to sit down.

Should I tell somebody? I don’t know anything about where it was, what building it was, what happened – I can’t even say without a doubt that I saw it.

I got to work late because my legs wavered and couldn’t keep a determined pace. When I got to my cubicle, I was thirty minutes late.

I sat my things down at my desk and rested in my chair.

What the hell did I just see?

I looked at my to-do list for the day.

I checked my emails.

Should I tell somebody?

Did I really see that?

I slowly got lost in the fluorescent hum of the stale corporate environment. I fished for my headphones and plugged them into the computer. I started playing that cover of ‘Bennie and the Jets’.

Am I imagining things?

I thought about that mural.