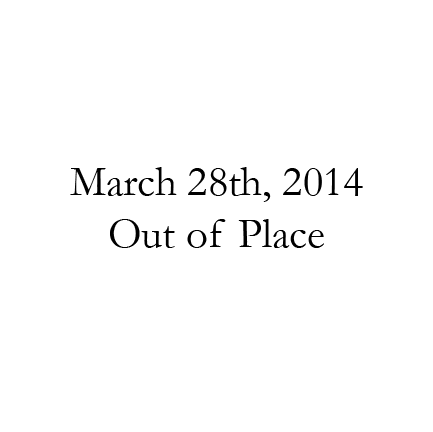 We met by accident – if you’d asked me when I walked into the party and first saw her, I would have told you: “No, I have no interest in meeting kids,” even though she was only three years younger than me (when you’re twenty two, three years is an eternity). But if I’d told you the truth, I would have told you that I thought her eyes were killer. I am such a sucker for gorgeous eyes.

As she was leaving the party, she and her friend tried to sneak out the front door and through the herd of drunken frat boys who were throwing dirt at each other (Reason #173 why I don’t drink. Beer, at least).

She caught a clod of dirt in the face in the midst of a drunken game between inebriated man-children. A small group formed around her. I looked up. I was leaning against the house, finishing a cig when several slightly sober people rushed to her aid.

I was surprised by her reaction: After a volley of scrappy dirt clobbered her tiny body, she slowly raised her head. A couple of frat kids started laughing, but most of them froze in shock. She slowly brushed the dirt out of her hair and spat the dirt from her mouth, then turned toward the direction of the thrower. In that split second, everyone expected a return volley of gratuitous profanity, but instead, to everyone’s surprise but with all inevitability, she quietly started to cry.

I didn’t get involved until after the huddle formed around her and I heard some of the drunken partygoers say:

“She got something in her eye.”

“She’s getting it out, asshole, that’s why she’s crying.”

“Get the garden hose.”

“No – asshole, just pour some beer in her eyes – I’ve done it before and it works well-“

That’s when I got involved. I dropped my cig and ran up to her, pushing the drunken frat boys and sorority girls aside.

Everyone laughed, except for her.

“Clean environment? What are you? Ralph Nader?”

“I never flush in a clean environment. That’s what I’ve been doing wrong!”

But she just turned to me, blinking and crying profusely, and said:

I led her inside to one of the bathrooms that hadn’t been trashed yet and she washed her eyes. I carefully and deliberately helped her to cleanse her eyes, in a sanitary procedure.

“Where the hell did you learn all of this?” She sniffed, trying to dry up the last of her crying.

“My dad’s an optometrist – an eye doct-“

“I know what an optometrist is. My dad’s a pastor. I guess this is what we both get for having some fucking awesome dads.” She wiped a flood of tears from her bloodshot eyes.

How did I end up here, sitting in a bathroom, a raging frat party downstairs, with a girl who’d gotten dirt in her gorgeous eyes?

“Um, yeah, I guess so…” I said, the words slipped out before I realized how stunted and awkward they sounded.

“I’m sorry-“ she said, realizing like I had just a moment ago the absurdity of the situation. She looked around at the dirt-smeared tissues and her tear stained t-shirt: Something that struck me about her. She was dressed modestly and unassuming – not like she was going to a frat party.

She stood and looked into the mirror at her red eyes.

I stood next to her.

She turned to me and shot me with her gaze like a sniper. I was caged in to her eyes as if the pupils were chains and her irises were shackles. I checked her eyes for dirt, but that only lasted a second or two, and after that, I just sunk slowly into her eyes. They pulled me in, easing deeper and deeper, until they made me forget what I was doing.

“Are they okay?” She asked.

“Uh, yeah. They’ll be less red when you get home. How far away do you live?”

“Damn. What are you doing here?”

“I don’t know. I was trying to leave – that worked well. I don’t even like parties.” She repeated.

“Why did you come then?”

Something shifted in her – At first I thought she took my question the wrong way, which she probably should have, because I’m pretty sure I put my entire foot in my mouth. But it wasn’t that. Her posture changed from brutally honest to passively coy, like she was hiding something.

She lowered her eyes. I hesitated, letting the silence linger, just in case she wanted to fill it.

“Sometimes I go to parties, even though I know nothing good is going to come from it.”

“Why do you keep going then?”

“I dunno.” Once again, silence. I’d expected her to shove my prying questions back at my face like a clod of dirt, but she didn’t. She was slowly opening up, but I couldn’t tell if this was it. I was so close to saying something and shattering the silence, but she beat me to it:

“I have this thing that I’ve always wanted to do at a party. Just walk up to a random guy who has no business being there – You know, the kind of guy that’s just completely out of place. Anyway – I’d walk up to him, in the middle of a party, and give him the most amazing kiss ever. And then walk away.”

“Why would you do that?”

“Because in his mind, whenever he’d remember me, for just that minute (because it’d be a minute long kiss), I’d be the most perfect girl in the world.”

Our eyes locked. I felt uncomfortable, like I’d just seen something I wasn’t supposed to see.

“What if you saw him again? It’d be so awkward.” My words clobbered out of my mouth, making room for my other foot and stomping any hint of elegance.

“I should probably go.” She grabbed the tissues and tossed them in the trash, and headed for the door.”

“The most perfect girl in the world.”

“You were about as completely out of place as I imagined you.”