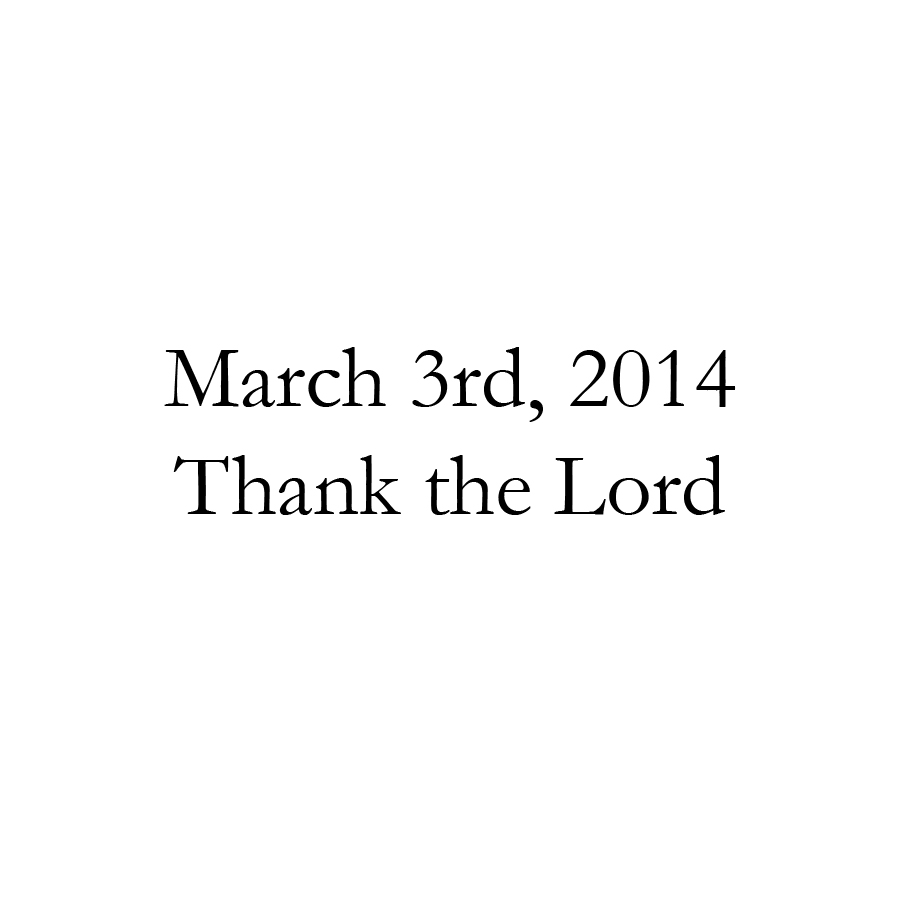 It started in the most innocent way possible. Most Christians in the South have no reluctance to lay their hands on a friend and say a prayer for a strained muscle or a broken ankle or a mother that is struggle with the flu. And yet, with some kind of omniscient irony, when healing actually is “received”, everyone is surprised. Word spreads. People say “Thank the Lord – isn’t He wonderful?”, but sometimes instead they say “Thank her for praying for you– Isn’t she wonderful?”

Stephanie wasn’t the kind of girl that would want that, though. Some people would say that she would secretly enjoy the attention, but that wasn’t true. I knew her better than most people; I was her roommate, for crying out loud.

So when she came home after praying for Sydney Evans that night, I wasn’t very surprised. I was a Christian, too, at the time, and if there were anyone through whom god would have moved, it would be Stephanie.

I remember that night very distinctly, because things started to happen and change very quickly after that. Stephanie excitedly sat on the edge of her bunk bed, trying to recount to me the events leading up to this prayer. Her excitement led her to her secret stash of jellybeans that we both kept for occasions of late night stories.

“It felt good to heal someone.” She said, popping a handful of jelly beans into her mouth.

I smiled. I knew what she meant, but…

“Don’t you mean it felt good for God to heal someone through you?”

She cocked her head, energetically – That sugar had already started to kick in. Finally, she grinned, wide eyed.

I didn’t realize the implications of that conversation until it was too late.

The next day, the school newspaper publicized that Sydney had somehow, “miraculously”, been healed. It was only a matter of time until word spread that Stephanie had prayed for her minutes before she had gotten better.

The campus health office issued a statement that they had no involvement in Sydney’s healing, but that she was, in fact, one hundred percent better. That week, Sydney joined the volleyball team to practice.

The next night, I walked into the dorm room to see Stephanie hanging off the bunk bed, talking on the phone and, once again, eating candy. I began to wonder whom in the world she was talking to. It wasn’t Jake (the boy that she liked from back home), it wasn’t Riley (the boy that liked her, from Statistics 101), and it wasn’t her mom or her dad or her brother. I slowly realized who it was.

A reporter had gotten wind of Stephanie, gotten her phone number from a friend of a friend, and called. I listened as Stephanie enthusiastically answered the reporter’s questions.

Stephanie had a joyful naiveté to her – She could never imagine someone wanting to cause harm or trouble, which made her lovely to be around, but sometimes made me nervous.

The following week, Sydney started in the game against Duke. And they won. The next day, the Stephanie was in three local newspapers.

Buzz slowly faded, and I assumed that Stephanie’s fifteen minutes of fame was coming to an end.
The next morning, she got a call. It was an early call. It woke us both up. I rolled over and tried to drown the conversation out with a pillow, while Stephanie cheerily answered the questions.

But it wasn’t a reporter.

It was a mother of a cancer patient at a local hospital.

Stephanie quietly tried to reassure the woman that it wasn’t her who had healed Sydney. But the woman pleaded and begged.

Stephanie wasn’t one to say no.

So before Statistics 101, Stephanie borrowed my car and drove to TriMedical, where she prayed for a cancer patient to recover.

In the middle of class, about the time when you begin to feel it’s gone way too long, but still twenty minutes until one could reasonably justify packing up; Stephanie slid her phone to me.

I looked at the screen.

There were twenty missed calls.

And a text that said:

“He’s healed! The cancer is gone! Call me back, thank you so much!”

Things happened really fast after that. Reporters called her every hour. She got scared and turned her phone off, and I let her borrow my phone to talk to her parents. After a couple of hours, they started calling my phone.

By midnight that night, hundreds of emails had poured into her inbox. Friend requests swamped her Facebook page, and her twitter followers spiked by the thousands.

A couple of people visited our dorm, and wouldn’t leave until she prayed for them. As I heard Stephanie praying for them in the hallway outside our dorm, I found myself praying, too: It was the first time in my life that I prayed for someone to not be healed. It wasn’t the first time that my prayers weren’t answered.

She was invited to several national news interviews, and decided to spend the next week in DC. The last night she spent in the dorm, I asked her:

“Are you gonna come back after the interviews?”

“I dunno. If you keep doing this, you’re gonna get really popular. I mean, more popular than you are.”

She grabbed a handful of candy.

“A little. I mean, yeah.” She grinned, wide eyed again. “Jake said he was gonna watch the interviews tomorrow.”

“I think a lot more people will be watching than just Jake.”

There was only one person who had the answer to that question.

He approached Stephanie’s parents, saying that he wanted to protect her legally.

But that wasn’t it.

Stephanie and her parents met with him. And by the end of the meeting, she was a business.

Stephanie began to earn money for every time she healed someone. After the first week, she had already made over a million dollars.

I saw her one last time before we stopped talking. I didn’t care about the money that she’d made, or the people that she’d healed, or anything she’d said ,or that she wasn’t coming back to school.

Five months later, she invited me to her house – her new house – to catch up, as if to try to rekindle a friendship that had already withered away with neglect.

Her new house was nestled in a wealthy gated community, and a strange kind of artificial sanitation hung over the massive residences as the gates opened and I entered the rich neighborhood. I drove up to the house she’d moved to, and parked my crummy Accord on the driveway that was meant for BMW’s and Porsches.

“Do you remember that time we talked after Sydney?” I asked her, studying her face. She looked different. She looked more full, but not more alive. She looked like she might live longer, but not in a natural way. She glowed with a fresh tan and jewelry – Subtly embracing her pristinely clothed figure.

I lowered my eyes.

I started for the door as our conversation came to an end.

“Do you have any friends that you want me to heal?” She asked. Her simmering naiveté mixed with authentic greed and bled through her words.