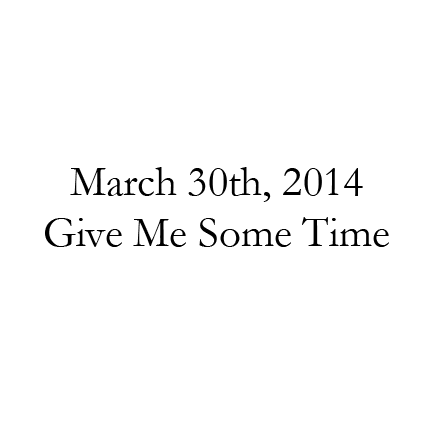 Just Give Me Some Time

I was home for Christmas holiday. Most likely the last time I would have a considerable amount of time to enjoy over the month of December, as I would graduate in May, only five months away. Those five months felt simultaneously like both an eternity and a blink of an eye.

I was determined to enjoy these two weeks. I joined the hasty exodus off of my college campus and tried to forget all the late night studying of Weber’s social theory and of genotypes and phenotypes and other terrible academic things that I thought I’d never need to know again. And of course, I was wrong.

My parent’s expectations were one of the only things that were more impactful than I remembered them to be. I felt the slow pressure of their love starting to weigh down on me, but it wasn’t until one early morning that I realized how much of it I carried.

I got up early that morning. Normally, a rare occurrence during a break from school, but this morning was different. I stepped out of my room and to the bathroom to brush my teeth, when I heard my parents in the kitchen, talking at the breakfast table before my dad went to work.

“We should just tell her that it’s already been pre-arranged for her.” My dad drawled out in his semi-joking tone of voice that he used when he was 36% joking and 64% serious. “Just tell her that we’ve already talked to the Lapointe’s and arranged the marriage, it’ll be a good thing for everyone involved, and she’ll realize it.”

“Well,” My mom said, in her nurturing voice, “I’m sure she just needs some time.”

“I don’t understand it, though. He’s crazy about her, why doesn’t she just say yes?”

I don’t know how often you get to hear your own parents discuss who they think you should marry, but this was one too many. I hastily crept to the bathroom to brush my teeth and wash their words from my mind.

I knew exactly who they were talking about. He’d had a crush on me a dozen times in the last six years, and I’d had the same for him, but for some reason, they never coincided. I’d changed a lot, but I’m not sure that he had, and maybe that was why he still was crazy about me. He was great, though: He was kind, handsome, funny, and smart, he had biceps and a smooth voice. Any girl would be lucky to be with him. Any girl would be crazy to turn him down. I never denied being crazy, it was a title I fully accepted as an excuse to turn down boys that every other girl dreamed of.

I brushed my teeth, showered, shaved, and dressed. I got downstairs right as my parents were finishing breakfast.

I looked at them. They looked back at me.

I grabbed a box of Life cereal and poured a large bowl with milk.