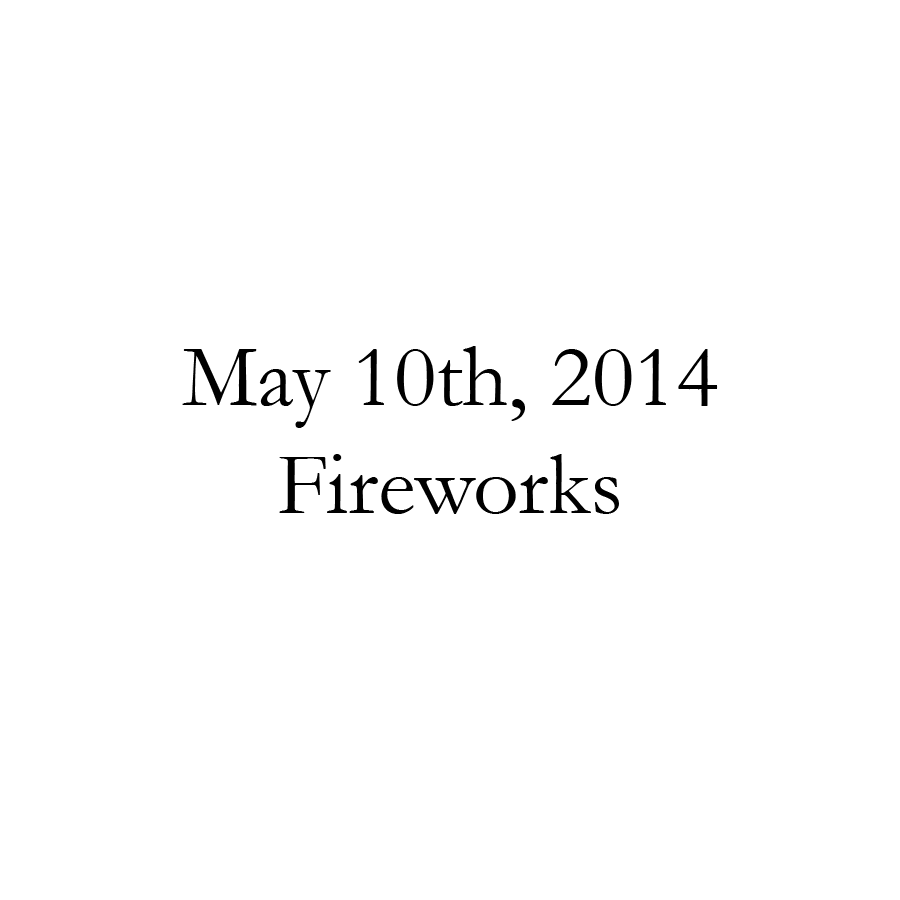 “Fireworks?” My roommate asked, headed for the window that led to the fire escape, and up onto the roof.

“Either that or an alien invasion.” I answered, annoyed to be further distracted from my work, and hoping for the latter. I’d wondered where the loud thundering noise was coming from – I’d never heard fireworks in Brooklyn or New York City, but my curiosity wasn’t strong enough to pull me away from my computer.

“I’ll bite.” My roommate said. His almost naïve enthusiasm was hardly ever diminished, despite the fact that it was growing late and he’d been busy all day. He pushed open the window and leaned out onto the fire escape, and into the drizzling weather.

I sat at my laptop, wondering what the hell to type next. I bounced back to facebook, which only led me to feel more distant, like the sound of those fireworks, or the alien invasion.

It’d been a while since I’d seen fireworks – The fourth of July was the last time I’d seen them, I guessed, since I had a rather reclusive New Year’s Eve. And I’d never seen an alien invasion. So if I did decide to step out onto the fire escape, climb onto the roof, and see whatever was making that booming noise, it’d probably be worth it.

I stepped out of the window and saw my roommate climbing back down the fire escape from the roof.

“Fireworks over the Statue of Liberty.” he announced, with his never-fading enthusiasm. “A great view of them from the roof.”

“You can see them?” I asked, just to make sure my time was going to be well spent, since it wasn’t an alien invasion, after all.

“Just be careful. The stairs are quite wet. And technically, we’re not supposed to be up there.”

“Great,” I thought. “I’ll be sure to try to avoid the rooftop patrol.” I would have let my sarcasm bleed out loud, but it was a little too late in the evening for such sour words, and the air was a little too fresh to poison it with such a sardonic response. I took his advice and carefully climbed up the thin metal steps to the roof.

The rainy mist amplified the glow of Manhattan and cast a beautiful tint over the skyline. My eyes warped and tried to adjust from an afternoon of staring at the computer. I waddled across the roof, thinking of all the apartment dwellers below me who were probably wondering what in the world somebody was doing on the roof at this time of night.

I walked to the west side of the building, wondering if the low thundering sounds had drawn anyone else up to the roof. They had. A couple stood at the edge of the roof, arms around each other, hoodies shielding their hair from the light rain, smoking a cigarette.

I wandered past them, to the furthest westward overlook. Behind me I heard them muttering.

I turned back, a little sheepish for ruining their nice moment in the drizzling rain watching fireworks, but not ashamed in the least.

I wandered further away, so as not to bother them, but it gave me a little bit of comfort to know that I wasn’t alone in my appreciation of the golden sparks that dotted the sky over Lady Liberty.

“I should contemplate my life up here.” I thought. “This seems like a good place to reflect on what in the world I’m doing with myself.” It did seem like a good place to do that, but instead, I just blinked several times and tried to get my eyes to adjust fully to the glowing skyline. No reflective thoughts visited to my mind. No glowing revelations about purpose or meaning or my direction in life.

Just the drizzle of rain, and fireworks and the Statue of Liberty.

The fireworks stopped, and I started to realize that it was getting cold and I was barefoot. I turned back, glancing over at the couple, still finishing their cigarette. As I walked away, one of those reflective thoughts I’d expected decided to drop by, though I didn’t give it much attention.

“How many people get to do this?” I thought to myself. “You’re on the roof, watching fireworks over the Statue of Liberty. This feels special. It can’t be though, it’s so simple and it’s not even for you. You’re miles from it, and anyone can see this. Anyone can go out onto their roof and watch this and think it’s for them.”

But most people don’t. It’s not special. It wasn’t made for me.

But somehow, it was.

It’s not the kind of thing you can share. You just stand there, in the rain, and watch the fireworks until they’re done. And then you leave.

I stepped back in to the apartment, my wet feet splotching on the kitchen tile.

“How was it?” my roommate asked, cheerily, as if I’d just been to a world premiere Broadway show.