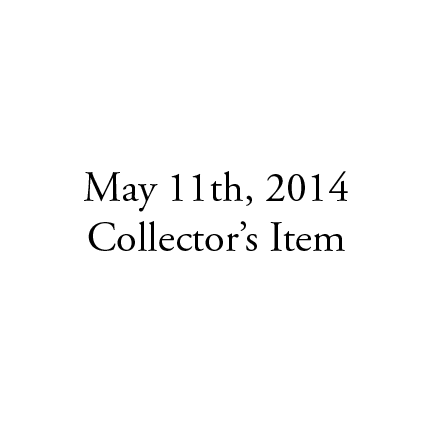 There’s probably something fundamentally wrong with the way I see other people. I’m just guessing, of course. I’m no psychologist, or psychiatrist. I don’t even know the difference.

Maybe it’s a problem that everyone has. I wouldn’t know though, because I’m not anyone else. Dr. Seuss was always so adamant about being nobody else but you, but I think it might make my life a little easier if I was more than just me. Sure, it’d be really freaking weird, and I probably would need a psychologist or psychiatrist just to figure out what was wrong with me, but I think it would make things easier, because I wouldn’t be the only one I was depending on, would I?

Where were we? Oh, yes, the way I see other people.

How do I say this without sounding more insane than you already think I am? Some kind of virus developed in my mind, glossed an icy lens over my eyes, and caused me to see everyone else like a trading card, or a beanie baby or an action figure, or some other sort of ridiculously over-hyped collectible. This only makes me treat them with the utmost respect and usually with a tinge of admiration, but propels me away from what most people have decided is the social norm.

I own a little bit of each of them. Like a share in a company stock. The hard part, though, is that playing the stock market game with my collection of friends is harder than playing on Wall Street, because I never know when one of the stocks is going to crash or spike, and I sure as hell don’t want to be left behind. So I take to the trading floor, every single day, and make sure that I keep my eye on the share values.

There’s one that really scares me. I almost lost it all with her. The kinds of things that hint that a spike just happened are subtle and small and easily missed, unless you have that lens.

Her shares went sky high. How do I know? Just look at this picture on Facebook. She’s over at a friend’s house for dinner, but it’s not just dinner, we know that. You can tell just by looking at her, and looking at him. Their eyes are comfortable together, like they’re supposed to be together. And their smiles are young, and vibrant, and authentic. There’s nothing forced about them. They’re together, and happy. And her shares are spiking so high that I’m afraid there’s no way to afford them any more, and my only regret is that I didn’t buy any more of them when I had the fucking chance. So what about my shares? What about the part of her that I thought I owned and that I thought she’d respect? And what about her being part of my collection, and me being part of her collection?

There was an investor who sold all of his shares right before the Stock Market crashed in 1929, and survived the economic destruction unscathed. When asked how he knew to get out when he did, he just smiled and replied: “My psychiatrist told me it would be a good idea, and I took his word for it.”

Maybe if I had a psychiatrist or a psychologist, he might have tipped me off and I’d have given up and sold it all of my shares. I wouldn’t have even bothered with the couple of shares that I thought meant something to me, and I wouldn’t be worrying about all of the shares that I didn’t buy when I had the chance.

I might as well be there, along with all of the other collectors, looking through the glass cabinet at the trading card that’s worth a hundred times the price I decided not to buy it at.
I shouldn’t worry though. What have I lost? Nothing. I just have to stop thinking about what I could have gained, and everything will be okay.

But I can’t stop thinking about what I could have gained.