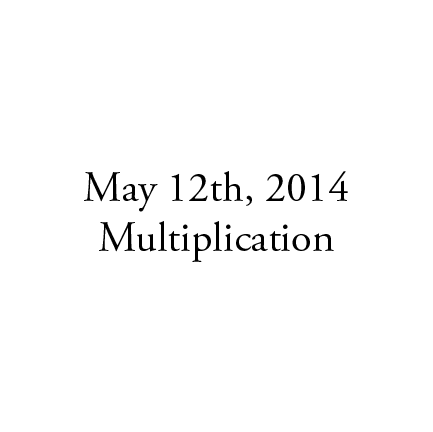 Multiplication always puzzled me. I wrote numbers out like they were some kind of mystical incantations carved in stone that would magically transform into a solution. I thought my teacher was a wizard, or a ghost, or – basically, Mrs. Franklin was anything but a 43-year-old elementary school teacher. I was pretty sure she was a witch, or a demon, and the only way I could keep from falling under her spell was to figure out how the hell she kept transforming a nine and a seven into sixty-three.

My dad tried to explain it to me the night after Mrs. Franklin displayed her dark powers, but my dad hadn’t mastered the art of explanation any more than I’d mastered the art of multiplication, and the exercise left me in tears and left my dad trying to hide a stream of empathetic chuckling. He said that the two numbers got married and had a kid, just like he and mom got married and had me. Neither made any sense to me, and I was left wondering if I was a product of multiplication or a sum of an addition.

It blew my mind that a four and a six could combine to equal twenty-four, but also combine in a different way and equal ten. There truly was a secret of the universe that all grownups seemed to have kept from me. Mrs. Franklin must have been one of the few who had broken the order of mathematicians and decided to share the secrets, like Prometheus sharing fire from the gods. And although I’d heard about some of the benefits, I was in no hurry to get burned or scalded or have to call the fire department.

So I lay on my floor, staring at the ceiling, wondering why my dad thought it was funny that I couldn’t figure it out, and why every single grownup that I’d ever met had always known, but never told me, like a collective secret in a secret society.

I snatched up the lined sheet of tear-stained paper with the mystical incantations and wondered how in the world two things could come together to make something else so entirely different. What was it about a seven and a two that had any connection to a fourteen? And yet, at the same time, they obviously added together to make a nine? Not only were all of the grownups in on the tricks, but the numbers were in on it, too, conspiring against me with evil intentions.

It took me a long time to finally crack the code – and after I did I was quite certain that the US government should hire me to decipher all of the cryptic spy languages used by the bad guys around the world.

I still earned a D- in Mrs. Franklin’s class, because although she taught me all about multiplication and long division and fractions and percentages, she never told me that sometimes two numbers just stop working together. And even if they’ve already added together to create a sum or multiplied to create a product, they don’t always work the way they did. It would have been easier if it was just magic, and if she was just a witch, but I wasn’t fortunate enough for the answer to be that easy.

And so I tried to ask my dad to explain it to me: why he was leaving and why he and mom just yelled at each other and why I would have to visit with him, then with her, then back with him again, then back with her. But my dad never mastered the art of explanation, and so multiplication will always puzzle me.