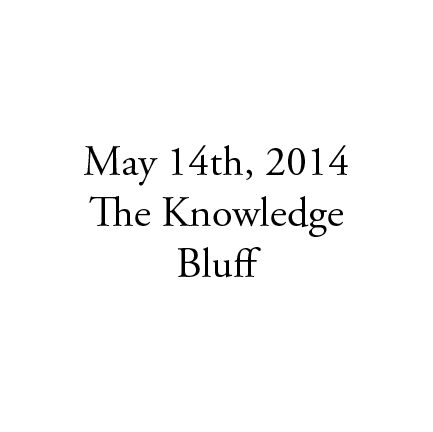 You can fake pretty much anything. People like to say that there are things that can’t be faked, like ‘experience’ or a doctorate degree or piloting a plane, but we all saw that Tom Hanks and Leo DiCaprio movie, and we know that’s not true.

Knowledge is a game of poker. That’s it. Knowledge has nothing to do with who’s smarter, who has a better degree in what, who studied neuroscience, how long you spent in a damn classroom, or any of that. It has to do with showing up and being more confident than the person across from you, and in that way, it is exactly like a game of poker. Sometimes, you have to have the right piece of paper, like a ticket, or a diploma to prove it. But when you don’t, that’s what printers are for, right?

If people only knew how easy it was, nobody would sell tickets to anything any more. Either that, or people would start to pay a little bit more attention to the ticket holders and wouldn’t have fucking volunteers be their gatekeepers. It’s easy to get what you want; you just have to believe it.

And I did. I wanted to see the freaking New York Knicks beat the snot out of Chicago at Madison Square Garden. They were going to, I just had be there.

A buddy of mine down the street on 119th went to one of the games the week before, and had a ticket that hadn’t been used, so I knew exactly what the tickets were going to look like – that was the easy part. I took the ticket and the stub, and edited it to say the proper time, date, and opponent that the Knicks would be beating, in this case, the Chicago Bulls, 7PM, February 24th. Got it printed and cut at Staples, using the excuse that I was a graphic design student at that artsy-fartsy school down in midtown. That poor Sales Associate probably just wished I would get the hell out of there and quit annoying him.

But why just stop at one ticket? There’s no fun in seeing the Knicks win alone, so I printed Monica a ticket, and brought her along, too.

Things were going great – We got through the doors without a hitch and to our seats with no problems. The pre-game warm-up came to an end, and that was when we ran into a little bit of trouble. But you can fake pretty much anything, it’s just a matter of the knowledge bluff.

“I think you’re in our seats, there.” A chubby white guy and his chubby wife nubbed their way through the crowded seating and shuffled toward us, their hands full of popcorn and large cups of soda.

I tried to ignore him. The game was about to start.

“You’re definitely in our seats, man.”

Yep, we were definitely in his seats.

I knew that, though.

I studied the tickets really closely, like I was straining to see them. Then dropped them, by accident, of course. As I leaned down to pick them up, I swapped them out for another pair of tickets I’d printed. Tickets that would seat them on the other side of Madison Square Garden, in someone else’s seats.

“These are for the other side,” I said, handing them back to the man. He grabbed them with his fat greasy fingers and stared at them in shock.

The man let out a typical string of profanities, the usual ones for any New Yorker. He gave me a sour glare and shuffled back down the stairs.

Knowledge is a game of poker, that’s it. Knowledge has nothing to do with who’s smarter, who has a better degree in what, who studied neuroscience, how long you spent in a damn classroom, or any of that.

Unfortunately, basketball is a game of athleticism and skill, and the Bulls had the upper hand in both. So after bluffing my way into Madison Square Garden, the only thing I got to see was the Knicks get the living daylights kicked out of them, 79 to 106.

Thank God that knowledge is poker, and not a game of fucking basketball.