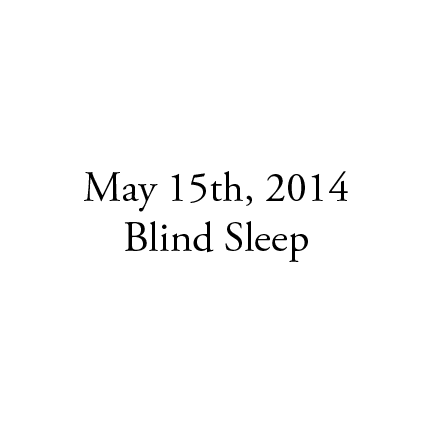 Blind people don’t dream. Or at least, that’s what my mother told me. So when I was in medical school and took that class with Dr. Watterson that touched on neuroscience and blindness and sleep and the human brain, I was surprised to learn that people who are blind do, in fact, dream.

I imagined that my mother might have been abbreviating reality for my juvenile mind. But nevertheless, Dr. Watterson’s reality was unabridged and harsh, as were his grades and his tests.

Growing up, I never met a blind person. I think my parents were pleasantly surprised when I suddenly wanted to be an optometrist as I approached high school graduation. “Oh, he’ll be so successful,” they must have thought. But that wasn’t what I was thinking at all.

The first blind person that I met was Carlyle Reggie Anderson, my friend Rickey’s uncle. At this point in my life, I was fascinated by blindness, but I’d never met anyone who couldn’t see. My friend brought me through his house, and on the way to the kitchen to grab some food after a hot game of basketball, I saw his uncle, Carlyle Reggie Anderson.

He spoke to me. His voice rustled the room and ricocheted across the walls, carving out a path for his words. He was a calm man, and would sit in his rocking chair for hours and hours on end, content and vibrant. We spoke briefly. I asked him what his name was, and told him mine. He asked me what school I went to, and if I liked it. He carried a concerned tone in his voice, like every second was a quarter that was spent, and he did not want to waste his, let alone anybody else’s. Rickey interrupted us by ushering me into the kitchen to find a summer snack, then back out to the driveway to continue our version of the final four. But I couldn’t play. My mind was still lost on the way to the kitchen in the middle of a conversation with Carlyle Reggie Anderson.

The next time I came over to play basketball, I took a fifteen-minute halftime. Rickey didn’t appreciate this, but learning about Carlyle was fascinating. He’d been a milkman, and had numerous milkman stories and escapades, which included witnessing a robbery, and getting intimate with a lonely housewife, and others, some of which he flat out refused to tell me. He was drafted for Vietnam, and never made it over, but while he was in the army, he learned how to make some damn good Vietnamese food.

More times than not, he spent our time together trying to convince me to leave him and go play basketball.

“Ain’t no use talkin’ to old shrubs like me when you can be outside. That’s where I’d be if I were you. I used to have a killer hook shot.”

Pretty soon, Rickey grew really annoyed by the fact that I wasn’t coming over to play basketball anymore, and he stopped inviting me. But I kept on coming. Eventually, I visited Carlyle every afternoon at 4:20. My hook shot and my free throw suffered drastically, but I got to know Carlyle pretty well.

One day, after Carlyle had made two plates of phenomenal Vietnamese food, I asked him if going blind affected his dreams. He scratched his thinning hair. “Has being able to see affected the way you dream?” he responded.

I went to his house every day for months. And one day, he wasn’t there.

Rickey answered the door and sounded fundamentally annoyed that I was there. I entered the house and stepped into the kitchen, expecting to see Carlyle. But I didn’t.

“He went to a nursing home, to be taken care of.” Rickey muttered. “You wanna go practices the shots?”

I looked around the room. A swollen padded seat rested in the rocking chair. A small worn out book of braille pages rested on his chair side table, but looked like it hadn’t yet been read, or even touched.

“Did he leave anything?” I asked.

The note was a little wrinkled, and was written in Carl’s signature shaky-hand and crooked letters style. Not dictated, just real. I opened it up.

I haven’t dreamt since the accident. It said. But just because you can’t, doesn’t mean you won’t. Dream on.

I put down the note, and practiced that damn hook shot.