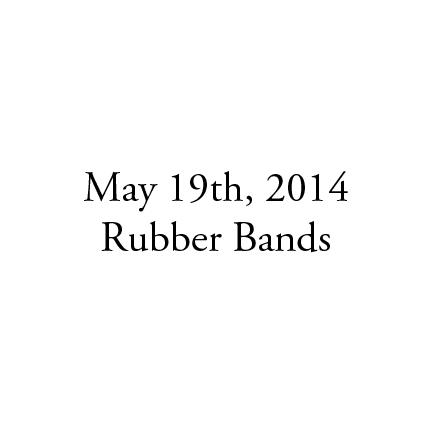 You might not know it, but places have rubber bands attached to them. Yes, I said that right – rubber bands. The really thin stretchy kinds that you shoot at that annoying kid in class when the teacher isn’t looking, or the really thick kind that wrap around broccoli stalks in the grocery stores. They pull you back to the places you’ve been when you try to leave, whether you liked that place or not. They pull on you, so tightly, and the only way to break free is to run as damn hard as you can and hope that when that rubber band snaps, it won’t hurt as bad as you think it will, and if it does, you just have to hope that the grass is greener – or at least green enough, to justify getting smacked in the face.

But that’s the problem, isn’t it? Rubber bands hurt like hell. I know this far too well, because I used to shoot rubber bands at my sister. My grand climactic scheme arrived one afternoon when my sister was practicing piano. I handed my father’s video camera to my brother, showed him how to turn it on, and loaded six rubber bands into my wooden rubber band gun. My brother and I approached my sister cautiously, and I opened fire on her, sending six rubber bands smacking into the back of her head, interrupting her progress on Chopin’s Nocturne Opus 9 No. 2.

This tactical ambush ended, of course, in my sister screaming, which caused my mother to scream, and my brother to drop the camera, leaving me with an empty rubber band gun in my hands, and a load of blame on my shoulders. My biggest regret was discovering that my brother had somehow missed all six perfectly targeted shots, but successfully composed a remarkably beautiful shot of our piano room wall. A true cinematographer in the making, he was, no doubt about it.

That’s the problem. Isn’t it?

So I guess I was a lucky bastard to avoid having them snap in my face when I tried to leave my hometown. I thought that if I ran fast enough and left quickly enough, those thin, stretchy rubber bands might still give a quick snap, but I’d be gone before they could catch up to me, and I’d never be back.

So, just as if I was some noble character taking the first step of the heroes journey, I ditched my car and packed my bags and cut my ties and got onto an overnight bus that led me straight out of my hometown, to where I could have sworn the grass was a damn shade greener. And I braced myself for those rubber bands to snap.

And slowly, like the smooth Andante pacing of Chopin’s Nocturne, the rubber bands pulled me back.

But hold on, now, that wasn’t supposed to happen- I’d left that small town behind. I was on to bigger and better things, to greener grass. I was going to get a job here, and find a wife here, and get married here, and have kids here. A city that is sixteen times the size has sixteen times the opportunity, right? I was supposed to feel the rotten snap of those thin rubber bands and be done with all of this.

So there I was, drowning in an ocean of opportunity sixteen times larger than anything I’d ever experienced, feeling the rubber bands pulling me – either upward or downward, but not giving me the grace to know the difference – only to find that maybe I was in the wrong ocean, after all.

So I gave in to the gravity of the rubber bands and let them pull me up or down or whatever direction they were going to pull me. And I held my breath, and shut my eyes and hoped that the grass was greener. When I opened my eyes, I was lying in bed, staring up at the ceiling in a house in my hometown, with freshly opened moving boxes crowding the otherwise empty room.

I’d dived in head first into the largest pool I could find, only to discover at the ocean floor that it was the wrong pool. So I held my breath, and prayed to God that those rubber bands didn’t snap.