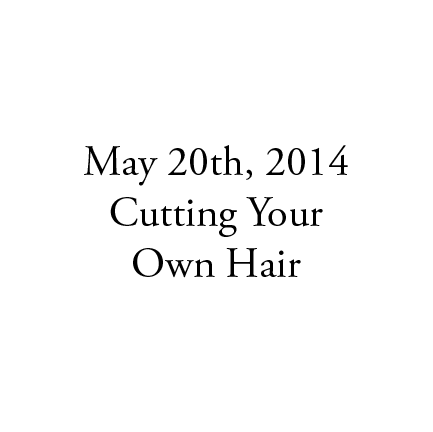 Cutting Your Own Hair

I felt helplessness, a little bit of fear, and a little more insanity, as I tried to drown my wonderings about what in the world my family and friends would think if it all went terribly wrong and I was left looking like a foolish school kid who thought he could keep on passing notes without the teacher noticing.

There was absolutely no reason I should have felt like this – I’d been making decisions like this in business since before I graduated college. Okay, I never graduated college, but that’s because I was busy starting my own company. It wasn’t long before that company was acquired and I went on to start my second company, which was acquired by the time most people my age were having their first kid. I spent the next couple of years being mentored by an experienced CEO and learning more than I ever could have by getting a four year degree at some sagging old institution, probably run by a Dean named Hammerschmidt or Woodward.

But when this decision projected itself on me like a violent gaze of a first grade teacher, it was the first time in a long time that I’d felt this way. This feeling of helplessness, and a little bit of fear, mixed with that terrible feeling that it probably will not turn out alright, and yet, there’s absolutely no way to get out except for going forward.

This is going to sound ridiculous, but it’s true, and I like to tell myself that the truth is really what matters: The only sensation I could remember feeling that I could use to describe what I felt at that moment was that it felt like the first time I ever cut my own hair.

I’d been running low on funds (a common occurrence while bootstrapping a company, it turns out). I had meetings with important clients the next day, and my hair had grown to resemble something like the mane of a wild animal. Unfortunately, I had no time to waste trying to convince my important clients that the mane was a result of lion-like courage and tenacity.

My bank account contained enough money for either a haircut, or for meals for the next several days (I’d mastered the art of efficient economical grocery shopping). You can guess which one was more important to me.

So, with no other options and a feeling of exuberant abandonment that accompanied many of my decisions at that time of my life, I took a pair of scissors and stepped in front of the mirror.

The first snip was a success – an eighth of an inch of hair fell to the cold tile floor. The best advice I’d ever received from anyone was to accomplish a large task in small steps, and that was exactly what I intended to do. And of course, after a short period of time, I got tired of this method and decided I could speed things up a bit. And of course, that was when things started to get interesting.

Craning my neck and leaning into the mirror like it was a hole in the wall, I quickly discovered what not to do, and also quickly invented a new look. In addition to these innovations, I also experienced the shortest length of hair since I was nine years old.

But when I finally finished, I looked in the mirror, and felt prepared to meet the important clients the next day. My success was vindicated when neither of my important clients said anything regarding my haircut.

I walked out of the meeting feeling that somehow, I’d escaped it. This feeling of helplessness, and a little bit of fear, mixed with that terrible feeling that it probably will not turn out alright, and yet, there’s absolutely no way to get out except for going forward; because once you start cutting your own hair, there’s very little you can do to fix it.

If only life was as easy as cutting your own hair.