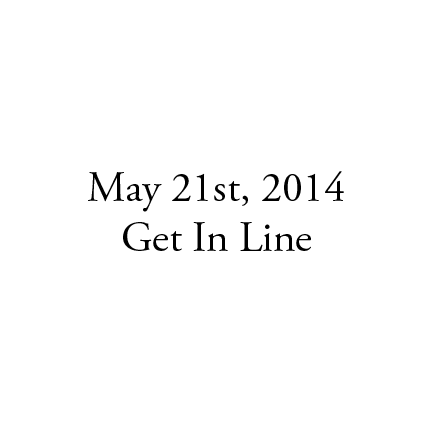 But I’d been looking forward to this concert for weeks –Her voice seemed to melt and blend together with the music like crayons, forming a brilliant swirl of thick, rich colors that made you believe that you could almost taste them. By far, she was my favorite musician.

But I’d already told myself I wasn’t going to meet her, no matter how present the opportunity. No matter how much her music spoke to me, no matter how deep her words pierced my mind and stayed with me like a deep, raw wound.

My ultimate goal was to someday play alongside her – Open for her, go on tour with her, play at the same festival as her – Not to be one more fan in a long line of fans that waited long past the time she wanted to be at bar that was closing down. If I met her then, she wouldn’t remember me – I’d just be another face in a long line of faces, telling her exactly what the person in front of me told her, and exactly what the person behind me was going to tell her. When the day finally would come, it would be much better to say “I’ve seen you play, but we’ve never met,” than it would be to say “I met you at your show three years ago,” and leave her scrambling for a graceful way to say “I don’t remember you at all.” My mind was made up.

She played the most gorgeous pieces of music, intertwined with satin lyrics that slipped through the cracks of the songs like sunshine through clouds.

I didn’t think any of my friends would appreciate her style of music, but I was wrong, apparently, and spotted a couple of acquaintances of mine in the crowd. After the show, they promptly got in line to have their stack of CD’s signed and to take a selfie. As much as I’d promised myself to avoid the line, I approached them to say hi and catch up. My friend’s enthusiastically jazzed personality was a stark contrast to my reflective mood, and he spent most of the next fifteen minutes talking excitedly about doing drugs and partying.

Before I knew it, I found myself at the front of the line, watching him carry his enthusiasm and charisma and drop it in her lap, exchanging smile after smile with her, as I imagined their conversation. I suddenly felt the urge to turn around, and walk away. Leave the bar, and forget that I ever had the opportunity to meet her. But before I could dart out of the line and confuse the line of rabid fans behind me, it was my ‘turn’ to meet her.

“Hi.” She continued her smile, like it was a contract, and it kept going, like an energizer battery.

“I don’t have anything for you to sign. I just wanted to say I love your work.”

“I keep up with all of your music online and-“

You can’t scale human connection. You can’t get in a line to meet someone and expect anything valuable. Part of me wished I could appreciate the fact that I’d gotten to meet her and hear her music and tell her how much I loved it, but part of me couldn’t get over the idea that sometimes to enjoy something, you truly just have to let it go, and then forget about it. Like a fresh fallen snow that is so perfectly blanketed over a landscape without a wrinkle in sight, but is gone by the afternoon – either by the scorching December sun, or the cascade of children’s snow boots.

After I nearly exhausted my supply of flattery and her supply of thanks, I fled the bar, and my reflective mood soured. I quickly darted into a grocery store to pick up a few items for the next day, and thought about how I totally blew any chance of a graceful story if I would finally get the chance to play at the same festival. I thought about how to her, I was just another face in a long line of fans, in just another city on her long line of shows – and yet to me, she was the only person whose voice could melt my thoughts.

I picked up my groceries, and got in line, hoping that if she didn’t remember me, at least the cashier might.