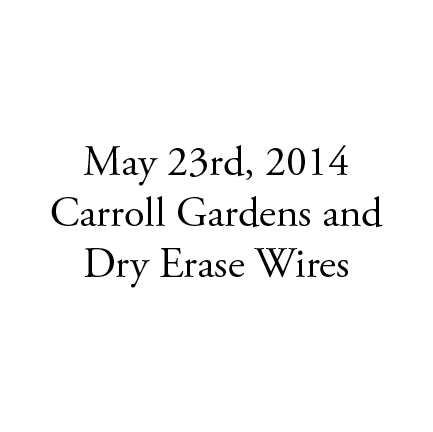 I unlocked my bike from the handrail and precariously carried it down the tight stairwell, down the five flights of stairs and out onto fourth avenue. I looked down toward 22nd street. The sky churned and taunted me, threatening to grow dark, but this was my chance – I wouldn’t have another free day to bike the across the bridge into Manhattan, and so whether it rained or not, this was it. I stepped onto my bike, and was off.

22nd street, 21st street, 20th street – all the way down to 9th street, past the Brooklyn Hot Dog shop that I’d have visited if I had less respect for calories. I biked past all of the roaring dusty construction near Smith Street, and north, through the tree shrouded streets of Carroll Gardens.

I thought. Someday, I’ll live here, in a nice, clean brownstone with trees on my street, two blocks from a fancy restaurant, and a block from a bookstore, with a nice wife and two kids.

I biked past Mercury Coffee, and that chocolate shop that I’d have visited if I had less respect for my bank account. The rich aroma wafted through the streets and made me wish that I was inside, slowly easing my afternoon away, instead of racing like mad toward the Brooklyn Bridge.

The serenity of Carroll Gardens slowly gave way to the densely packed streets of downtown Brooklyn, and I snaked my way through the traffic, leaving my desire for a clean, calm, and rich-smelling brownstone far behind.

I raced onto the bike path in between the two lanes and saw the bridge ahead of me – massive, strong, ancient and durable in the billowing clouds, not like the last bridge crossed.

The last bridge that I crossed: I’m still not sure if I want to tell you where it was, or even if I could. It was fragile, and rickety, even though I’m sure that it wasn’t always like that. I used to cross that bridge every single day, until it slowly wore out.

My mind snapped back to the Brooklyn Bridge as I jerked out of the way to avoid a tourist. I stole a glance over my shoulder and heard a British tourist apologizing for trying to snap a picture while standing in the bike lane.

The last bridge I crossed was never as busy as the Brooklyn Bridge – if it was, it would’ve broken down much sooner.

I paused underneath the first tower to look up at the expanse of wires, netting the bridge together like dry erase marker on a whiteboard sky. I thought about snapping a picture to remember, but I have no trouble remembering bridges that I’ve crossed. I reached the second tower quickly, and passed squad upon squad of tourists who stopped to buy candy at the end of the bridge. I let my bike glide down the ramp and onto the busy streets of Manhattan.

The last bridge I crossed didn’t take me to a frenetic city, brimming to the edge with a corrupt density of people. The last bridge I crossed took me to her, and the last time I crossed it, I had already let it grow old and decay and sag. The Brooklyn Bridge and the Manhattan Bridge have the city of New York to repair them and watch out for them, replace the broken boards and fill in the cracking asphalt. But our bridge only had us. We had built it ourselves; starting from the moment we saw each other. And with the first words we said to each other, we started to lay the foundation. Our eyes built the bridge that our hearts slowly crossed, and we found ourselves standing above open water, looking down at the crashing waves.

But then, one day, we stopped crossing it. We found other ways to get to where we wanted to go. The asphalt cracked, and the wooden boards on the pedestrian path started to rot. The bridge started to sag and the waves below us started to eat away at the foundation.

The last time she crossed it, she’d visited me, in Brooklyn – Or at least, I thought she did. She was there in person, with her smooth humble smile and her rich quiet laughter – but her mind was somewhere else.

We talked for six hours. Riding the subway through Manhattan like it was an attraction at Disney, and we were nine-year-old gluttons for entertainment with an all-day pass to the amusement park.

Something finally came into focus, like I’d been using a cheap lens set on auto focus, when I should’ve just been adjusting the focus manually all along. I’m not sure if it was my god, or her skepticism, or if it was her family, or my loneliness. Or my desire to settle down in a calm, clean brownstone in a neighborhood like Carroll Gardens, when all she wanted was anything but that. Someday, I told her, but she didn’t want to hear any of that. And no matter how many more times I wanted to cross the bridge that we had built, it had already been crumbling beneath my feet, and I was hanging onto the dry erase wires with both hands.

I said goodbye to her at the airport. She turned, and left, and that was the last chance I had to cross that bridge before it finally crumbled to pieces and fell into the waves below it.

And so I paused, caught my breath, and turned my bike around, back across the Brooklyn Bridge, for the very last time.