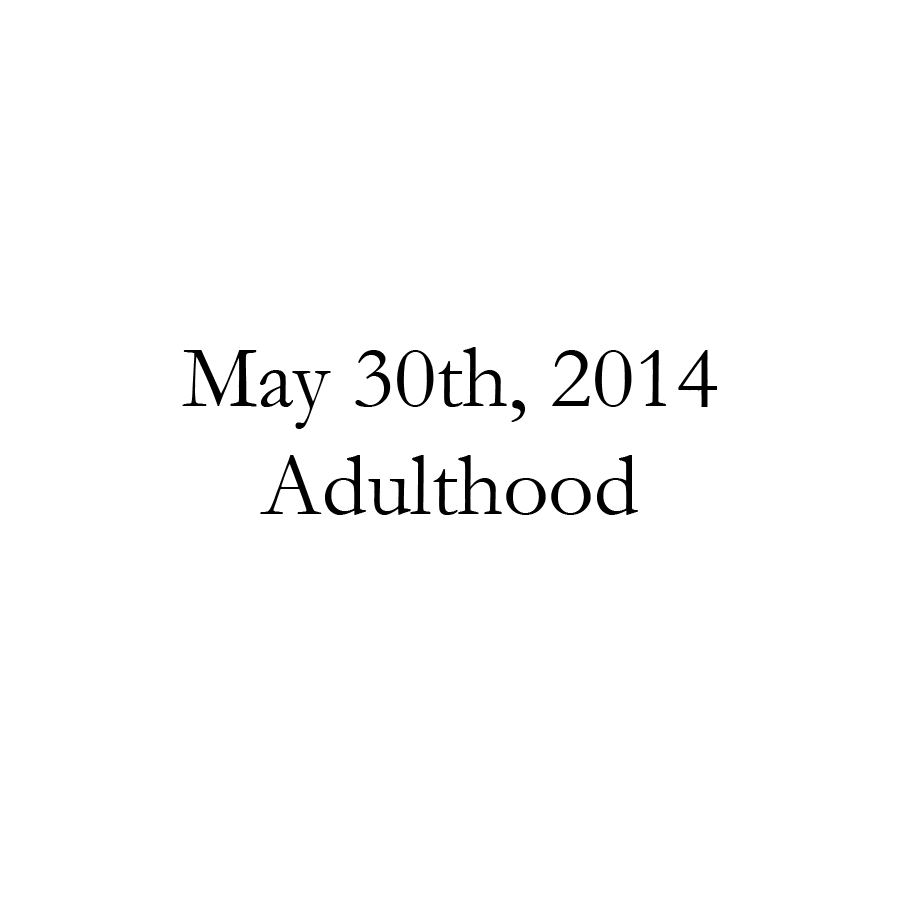 When I was young, I used to imagine that something big and monumental was going to happen to me before I became an adult. Being an adult isn’t just a succession of moments that we think of as ‘Now’. You can’t add up today and tomorrow and the next day and the next and all of the days between when you’re eight and seventeen to equal an adult. Something has to happen between now and then – something that makes you different. Older, of course, but more official, wiser, more calm.

I didn’t know what this monumental event was going to be – but I had a couple of really good guesses:

I was pretty certain that adulthood was like an award. Bestowed upon the hardworking and the deserving like a trophy that says “You’re now a calm, professional, able-bodied and sensible-minded individual.” The adult of all adults would give it out – Probably somebody named Dr. Johan Schmidt-Meyer, D.A (that’s Doctorate of Adulthood, of course), who would wear a professional adult-robe and a professorial mustache that would bob up and down when he talked in his British accent. I imagined that when I was sixteen or seventeen, I would walk across a large stage and be awarded my medal of adulthood by Dr. Johan Schmidt-Meyer, D.A., Professor of Adulthood and Adult Studies. With this medal, I would be well equipped to do things like go to college, get married, have a kid, and give fatherly advice.

I entertained an alternative theory, although this one wasn’t quite as solid. I speculated that although it did seem like all adults had some kind of official declaration of adulthood, it might only have been achieved through exposure to a highly classified educational film, not a mustached professor. Of course, it would only be screened at limited theaters, and all of the show times would be secret. Tickets would be sold out before you could even buy them, so anyone who ever had dreams of being an adult would have to either buy them on the black market, or sneak in to the see one of these ‘Adult Showings’. Sometimes, if you keep an eye out, you might see a sign for an ‘Adult Show’. It’s a theory, anyway.

But maybe that was too easy? Where was the strenuous climb, past the difficulty into adulthood? I heard people talk about peaks and valleys of life, and that could only mean one thing, of course. Somewhere, there had to be a mountaintop that held the secret to adulthood. The rocky cliffs would keep the weak and the unworthy from reaching the summit and becoming full-fledged adults. If you did get to the top, there was a goblet that held an adult beverage – I’d heard about those, too. Once you reach the top of the adult peak, you can take a taste of the adult beverage, and it works like a potion. One gulp, and you’re ready to be an adult.

I always saw college graduation as something in the future – something that happened to me when I was older, taller, had a substantial amount of facial hair, and could responsibly talk about stocks and bonds – But nope, I was wrong. I thought marriage was in the future, too. That it was something that would magically happen to you – You’d wake up one day, and be in a perfect relationship, ready to happily marry and have 2.5 children. And everything would be great, and you’d know exactly what to do all the time, because you’re an adult, after all, right?

I was wrong about that one, too.

I always thought these things were in the future – but it turns out that the future is just a succession of moments that we call ‘Now’. Part of me is relieved that there isn’t a Dr. Johan Schmidt-Meyer, or an adult show, or an adult beverage (at least not ones that I was thinking of).

But part of me wishes there were those things, because at least then I would know for certain that I’m not going to mess up.

Because I’d be an adult, and that’s what being an adult means, right?

You never mess up.