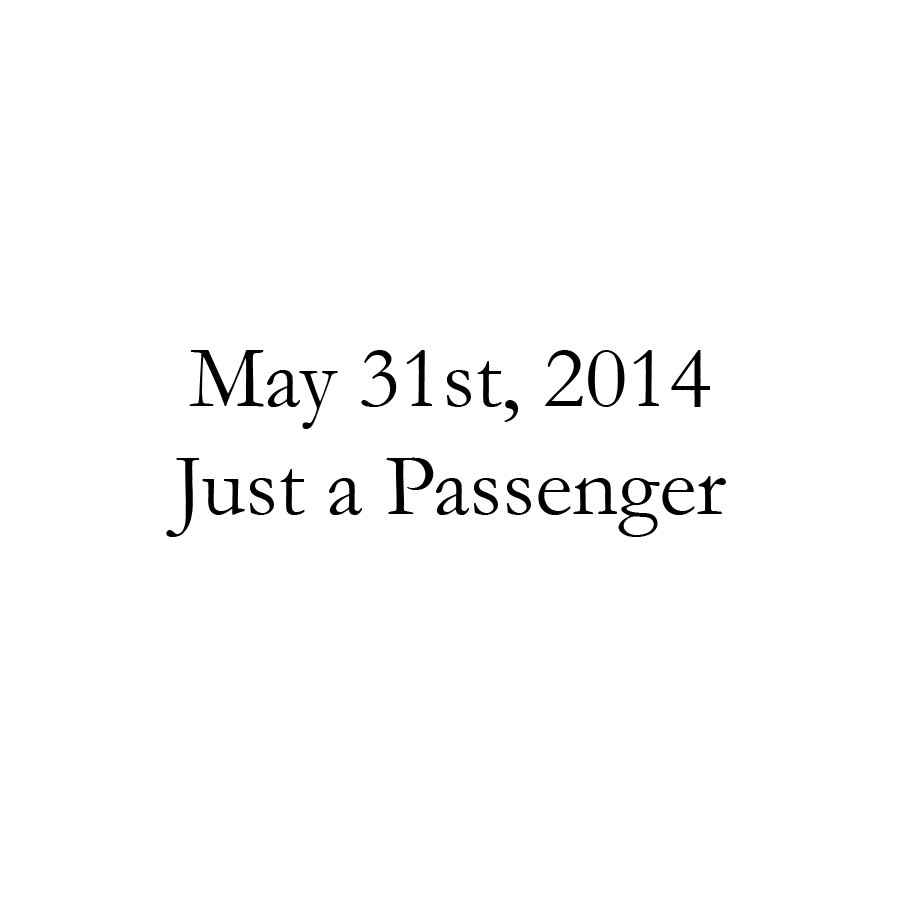 This was not the right way.

This train should not be crossing the bridge. But it was – So I guess I should clarify: I should not have been in a subway car, crossing the Manhattan bridge at 30 or 40 miles an hour, heading away from my 10:20 flight at JFK.

I bit my lip – There’s no easy way to transfer from the R train to the A train without going to Times Square. And that wasn’t an option. I stepped to the map, as if somehow I could move the different lines around and choose an intersection that I would want to exist. Maybe the R and the A could both reroute and meet up somewhere – I don’t know, maybe near Chinatown? Or City Hall? Yeah, that’d be great. And while they’re at it, just reroute the A so that it’s a direct line to Terminal 8 at JFK.

But it doesn’t work that way, unfortunately. So I leaned over to see where I could make a connection. There was a gentlemen resting his head on the part of the map that I needed to see, so I kindly asked him:

“Excuse me, could I look at the map?”

He moved, and replied, his words laced with a Russian accent “Where are you going?”

He turned to the map.

“Look here. Get out at next stop. Walk to Canal Street stop.”

I looked at the map, calculating the time.

“How long of a walk is it?” I asked, shifting my luggage that would probably not make the 50-pound limit at the airport.

I nodded. The doors of the subway car opened, and I dragged my luggage onto the platform, through the door, and up the stairs. Who needs a gym when you can take the wrong train and have a 10:20 flight to make?

I lugged my massive suitcase down Canal Street, through the Lower East Side, hoping to God that I could make it to JFK on time. Every cracked and cratered sidewalk, and pot-holed strip of asphalt made me wonder whether or not that was actually possible.

I got to the Canal Street A-C-E station and lumbered down. I caught a train to Brooklyn. I looked at my watch.

There’s no way this train will make it in time.

When the train reached downtown Brooklyn, I darted off, lugged my luggage up the stairs once more, and cabbed a taxi.

Had I been the one driving myself, I would have unleashed a fury of profanities (or pseudo-profanities), but instead, I wore a clean, polite smile like an uncomfortable tie, knotted and pressed around my neck, showing my best behavior. I started up a friendly chat with the taxi driver, and sparsely mixed in some questions like: “How long does it take to get there?” and “Not too long, right?”

He was Pakistani – had moved to New York four years ago, and didn’t want to be a taxi driver, but there were no other jobs that he could find. He would fill any lull in the conversation with his wavering voice, telling me about yet another time that the police took advantage of him.

Normally, I wouldn’t carry on a conversation with taxi drivers – I figure they have to put up with passengers all day, and they probably don’t want some random stranger prying into their lives. And yet, I felt shallow, because the one time that I’m in a bloody hurry, I try to mask it by being overly friendly. I reach out and talk to him, ask him about the busiest time of day, ask him about his work, his life, where he lives, how long he’s been in New York – not because I genuinely want to know, but more because I don’t want him to think I’m just a selfish jerk who just wants to be shuttled across town by an immigrant.

We made it to Terminal 8 at JFK on time. He dropped me off, and I wished him best of luck.