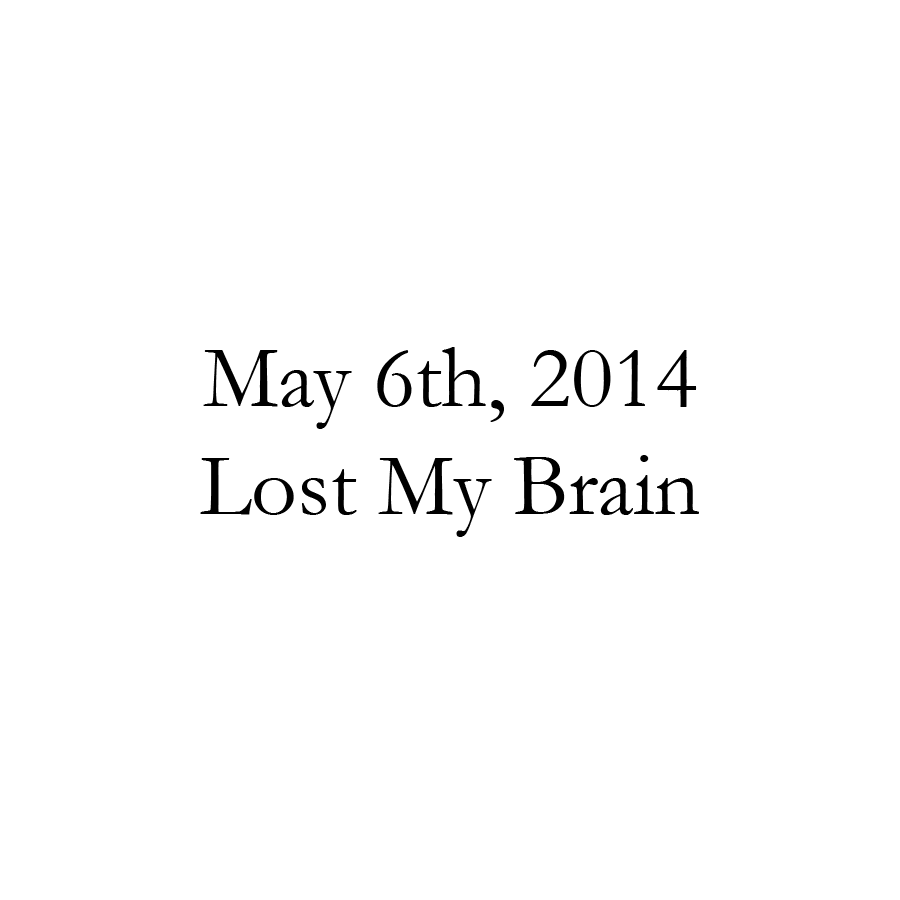 I was walking down the street today, and my mind decided that it was done. It’s a frightening thing, honestly, when a member of your body up and decides to leave. It’s happened before only once, with my pancreas. The scary part about that was that my liver thought it was good fun and tried to join him, but that’s another story. So when my brain knocked on the roof of my skull and boldly declared that it was leaving, you can imagine my horror.

There wasn’t much I could do to convince it to stay, because my brain wasn’t actually on my side of the argument. I tried to reason with it, but reason is a difficult thing to do without a brain (although many people often attempt this, and politicians have gotten very good at it).

So that was that: It pushed open the trap-door ceiling of my skull and hopped right out, onto the street. It waddled along, like a maimed raccoon, trying to get as far away from me as it could, leaving me as cold as a zombie and as empty as a college student’s bank account.

I lumbered after my brain, praying and hoping that I could catch up to it before it could find a brainless skull in which it would rather live.

But alas, my brain rounded the corner, hopped through the gate, down into the 25th street station and caught the R train before I could realize what the hell was happening. I lumbered onto the next train and found myself lost between transfers at Atlantic-Barclays. That station can be confusing as hell, especially when you don’t have a brain to help you find your way out.

I felt like it might be a good idea to return to my apartment, but my legs took me the opposite direction, and I started to find a good many other things that felt a lot better. I hopped onto the top of the F train, riding the roof of the car like it was a surfboard, and as if Carroll Gardens was a tidal wave. Things were starting to get a lot more fun, and I started to think – or, rather, I started to feel that maybe things weren’t so bad without a brain after all.

I walked the Brooklyn Bridge, jumped off into the East River, and swam to Ellis Island, looking up at the Statue of Liberty. Looking back, I’m not quite sure how I was able to swim so easily and so quickly, but I imagine that having no brain to weigh me down helped.

I climbed the Statue of Liberty and looked out her eyes. I took the ferry back to Manhattan, put all of my money into a plummeting stock, then ran up to Central Park and chased the geese for as long as I could. I wandered out of the park, and went swimming in the fountain at Rockefeller Center.

After all of this brainless nonsense, I found myself back at my apartment, but had still not found my brain.

The next morning I listened to a voice message from my internship, telling me that I was no longer needed. I took that as a very good sign that I was moving up in the world, and decided to celebrate by asking an old friend of mine for her hand in marriage. I sent her a text, but for some reason, did not get a response.

I was beginning to like living without a brain, and I figure that because I suddenly got comfortable, I was asking for change. I woke up the next morning only to find my brain on my doorstep, like a runaway pet, eager to be let back in.

So I opened the trap door to my skull and let my grey cranium hop back inside. I turned the key, sealed it shut, and threw the key out the window, right out onto Fourth Ave.

“Where the hell have you been?”