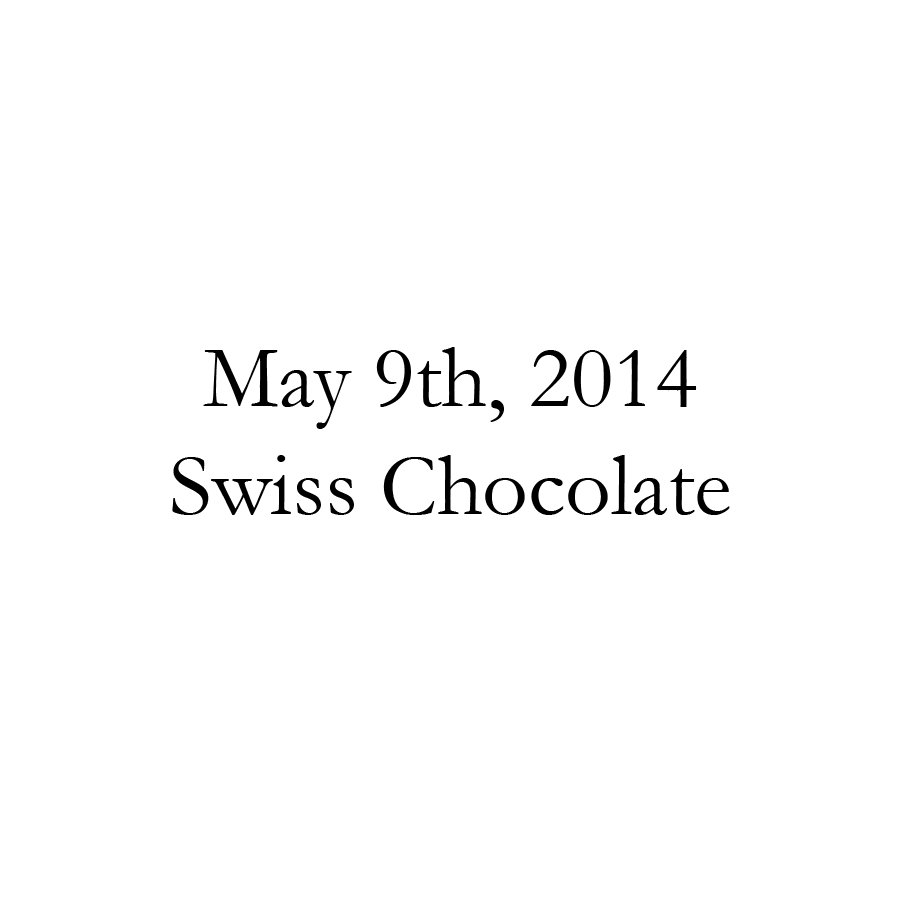 The first time I tried Swiss chocolate, I was in love. When I say Swiss chocolate, I mean real Swiss chocolate, not that imitation stuff you buy from the somewhat obscure chocolate shop in Park Slope. The rich, dark flavor hinted at something strong and deep that threw my taste buds for a spin. I bought three bars and stashed them on my carry on as I returned home to the US. Only two of them made it back to US soil, but I assure you, that was intentional. Okay, it may not have been intended, but it was certainly worth it. When I got back home, I slowly rationed out one of the bars over the next month. And the other one, I stowed away in the fridge so that on a rainy day when I missed Switzerland I could pull it out and it would remind me a little bit of the two years when I worked abroad.

I stumbled off of the plane in a dazed bundle of jet lag and stiff muscles. And even though I loved being away, there was something that felt really good to hear even a formulaic flight attendant say: “Welcome back.”

When I’d walked through security two years ago, bound for Switzerland and all of the adventures that I knew I’d have, I was armed and guarded with only my fresh memory of her contagious smile, the shy joy in her eyes, and the smooth skin that blessed her thin frame, decorated only by a line of poetry tattooed with rebellious confidence. And as that stupid and intrusive metal detector scanned my body to make sure I had nothing on me that could hurt anyone, it foolishly said I was clear to move along. There are no metal detectors that can find the things that really hurt you, but I found that out soon enough, I guess.

The first several months apart infected me with a small lie that planted itself in my mind like a seed and slowly grew roots that were deeper than it’s limbs. The lie spread it’s vines through my mind and wrapped around my memory of her laugh and her smile and even her skin, twisting them, ever so slightly.

And every time I’d say goodbye, the vines that grew in my mind twisted those memories of her a little bit more. “It’s okay, though,” I told myself. “When I see her again, in person, everything will be better and everything will make more sense.”

But our talks got further and further apart. My neighbors spent a little bit more time up late at night, the internet got heavier and heavier, and I didn’t hurry as quickly to get home after work each night. And yet, nothing about her diminished in my mind. It only grew, stronger and stronger, along with the vines the crept up the walls of my mind and into the cracks between the cobblestones. The memories of her smile lingered in my mind like the taste of that Swiss chocolate bar, the one that I stowed away in the fridge after I returned, waiting for a rainy day.

What should have frightened me was that the vine kept on growing, even when I didn’t talk to her. It had a firm grip on the fragile memories of her that I kept in my pocket, the ones that the metal detector failed to see. And it molded them, like the roots of an old, thick tree can. The sprawling limbs clambered through my mind and crafted a brilliant image of a young girl, waiting eagerly for me to return so that we could ride our bikes together down Fourth Avenue, down to Union Street and into Prospect Park, stopping at that somewhat obscure chocolate shop in Park Slope to buy a bar of chocolate.

So when I came back to the States, I packed my life back into an oversized piece of luggage, stashed my Swiss chocolate into my carry-on, and fit this new image of her into my pockets. And even though they all should have heard the ticking bomb, waiting to explode and blast down the crumbling walls of my mind, the metal detector didn’t see a thing, and I returned to the States, carrying the most dangerous thing I’d ever held right through security.

I stumbled off of the plane in a dazed bundle of jet lag and stiff muscles. I walked into the airport, expecting to see that familiar face that had lived in my mind for the past two years, but instead, I saw someone else. And there I was: Caught awkwardly introducing the brilliant, but bent image of the girl I grew to love with the girl she really was. The girl she really was hardly noticed, and smiled that familiar smile, although it wasn’t familiar to me.

When I was back in the States, and when I least expected it, that rainy day came and I found the bar of Swiss chocolate, behind an old stick of butter and next to some leftover packets of ketchup, right where I left it. My fingers pulled it out and before I knew it, had unwrapped it and broken a small square from the pristinely preserved block.

It was cold, and the flavor had faded away like a distant warmth you might feel from a campfire that is too far away. It wasn’t like I remembered it.

It wasn’t like the first time I tried Swiss chocolate.

When I was in love.