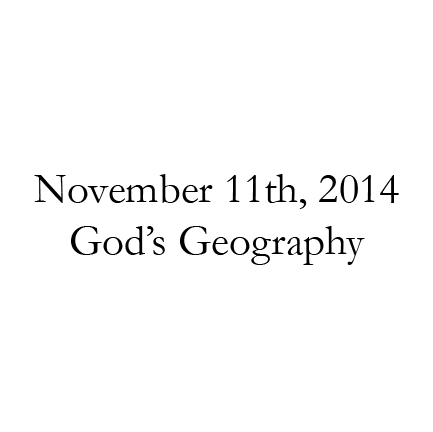 You thought that the whole reason I sent you to L.A. last weekend was for that conference, didn’t you? Of course you did. But that’s not a surprise to me. Hardly anything surprises me. I knew you would think that.

But that was part of the fun of sending you there. That’s part of the fun of everything that I do. I get a small chuckle when I think about all the people who are trying to find me in churches or temples or books, when really, I’m running around with my hands in the intricate details of their intertwining threads of existence: the words they hear and the words they say, the steps they take and the steps they don’t. I laugh out loud when I think that you’ve been attending church every Sunday since before you could talk, and yet, you’re looking for me so desperately that you don’t even realize that I was the one who got you to where you are. I was there when you moved away from the sprawl of Hotlanta. I was there when you landed at LAX, wondering what the hell you’d gotten yourself into, when in reality, you probably should have wondered what the hell I’d gotten you into. But I knew what was going on. And as you clambered to adapt to the vibrancy of Southern California, my eyes were several years ahead of you.

Most people would say that L.A. is not the best place to find God. And that’s true. But it’s a pretty damn good place for me to find them. Those two years you spent running around the City of Angels, I spent waiting for you. And finally, when you’d decided that a city with perfect weather and miles of stagnant traffic wasn’t the place for you to grow, I gave you the reason to move back.

So you did. You deracinated the roots you had so carefully laid into the desert sand of Southern California and followed me back to Hotlanta, where almost all you could do was wish that Atlanta had a coast.

By that time, most of your friends had moved away. New York drew a lot of them, pulling them like magnets to the concentrated metropolis. Chicago drew more of them. And you were left to wonder if there was anyone with whom to spend your time. You had plenty of it to spend, but it seemed like the only places to spend it were discount dollar stores. So I encouraged you to wait.

You spent a year in Atlanta, watching your friends become more and more sure of what they were doing with their lives. They all converged onto their respective futures — marrying, having kids, taking out mortgages — leaving you with nothing but a sharpened sense of insecurity in your loneliness.

That’s when I sent your invitation.

You got that invitation out of the blue. It seemed like a good opportunity for you, I’m sure. That church that you attended a couple of times in L.A. invited you to return and visit for a conference. They offered to pay for your travel, so you agreed.

But it was a pointless trip. God, so pointless. You learned nothing new, felt nothing new. You’d harbored a small expectation that maybe I’d show up there, to make you feel justified or content. But that’s not why I show up, and I sure wasn’t there.

I was busy arranging other things for you.

Your flight got delayed twice on the return trip to ATL. Your plane finally landed at 11:13pm, and spit you out with a bit of jet lag and hefty dose of leg cramps. As you walked down the wide, empty terminal halls, your eyes wandered to gate C17. You looked once, then twice, and then recognized her face, just like I meant you to.

“Adelaide,” you said. Surprised and excited to see a familiar face, after a weekend of misguided spiritual pursuits.

She looked up. Your fatigued eyes and the familiarity of your face were lost deep in her memory, but the warmth in her expression glowed with a welcoming smile. She stood and gave you a hug, and you both tried to review the year and two months of time that you’d spent without seeing the other, while reconciling the simple occurrence of seeing someone who, for one reason or another, you’d never expected to see again,.

“Are you back in Atlanta now?” she asked you.

“Have you seen any of the old crew?”

“Well, we should catch up when I’m back.”

She nodded toward her gate.

“Going to Chicago to visit my old roommate. She just got a job up there. But the flight got delayed. Isn’t that awesome?”

You smiled, nodded, and bid her farewell.

“Have a great trip,” you said.

You turned away, into the vast, empty hall. She called your name, and you turned back.

She smiled. You waved, and turned.

And you! You thought that the whole reason I sent you to L.A. last weekend was for that conference, didn’t you? Of course you did.