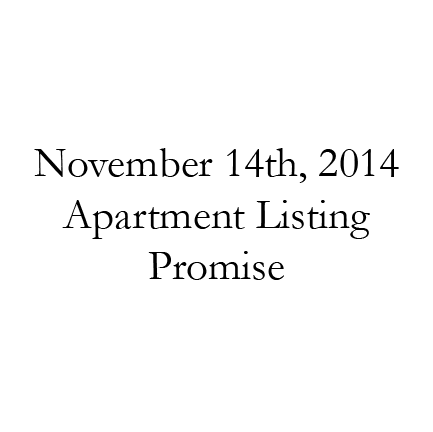 “How long will it last?” she asks him.

He knows that the city bleeds transience — nobody stays here for very long. Two or three years, most of the time. There are always exciting things that draw people away — or maybe that’s just the excuse people give when the aggressive expenses start to wear them down and they run out of money. Or the congested subways crowd them straight out of the city, or the frenetic pace of life accelerates their social velocity to its limits.

She smiles and nods. Because he knows, after all. He’s confident. He’ll find a way.

That’s the best way to start a marriage. Confident, determined, with the knowledge that they’ll probably run into difficulties, but with the understanding that they’ll find a way to make things work.

She believes in him, and he believes in the city — believes that it won’t challenge him, or reject him, or deny him. And if it does, he tells himself, he’ll ultimately embrace the aggressive atmosphere for what it is. It’s a city, after all, not one of those pretty little lake towns you see in postcards or on your friend’s instagram. The city is fleeced in reality.

They step off of the subway and up the chiseled concrete stairs, holding hands as they walk.

He looks at her with an impish smile.

They begin to grow with the city, and with each other. Every morning, the city smiles and greets them. She runs through the golden light that pours through the park at 3rd Street. Every night, he holds onto the city, and promises to never let go.

But the city is cruel — it draws them in, whispering sweet words into their ears, only to crowd them and starve them and drain every drop of warmth from them. The winter is colder than either of them had expected, and even after wrapping themselves in layers of coats and sweaters, the city refuses to relent.

But she believes in them together, and he believes in himself. That marrying and becoming together won’t challenge them, or reject them, or deny them. And that if it does, they’ll just embrace the other for what they are. They’re human, after all. She isn’t a pretty little doll, or a Barbie or a cheerleader. Neither is he a superhero, or an action figure, or a movie star.

Reality infects them both. Their vision of the city, and of each other, and of themselves. He knows that relationships bleed transience — nobody really stays with someone for very long. Two or three years, most of the time. But he soothes her, and twists his voice into a harsh lie:

Sometimes things just don’t work out — or maybe that’s just the excuse that lovers give when the relationship begins to cost them something. When one slowly restricts the other’s flexibility. Or when one can’t keep up with the racing pace of the other.

He studies the promise that he made until he can recite it backwards, as if saying it backwards could undo the naïve words he had laced delicately together. He no longer spends the night holding on to the city, and she no longer spends the morning running through the park. They spend their evenings waiting, begging for that single exciting thing that promises to draw them away. An excuse. That’s all they need. And until they find it, they pore mercilessly over apartment listings from some other city, waiting.