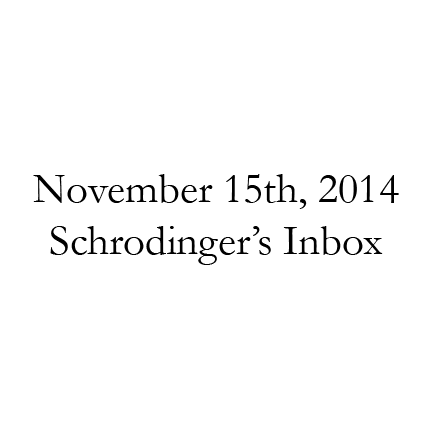 Let’s talk about Schrodinger’s cat for a second, shall we? Remember Schrodinger? He has a box, and inside that box is a cat. But I’m not just talking about any old cardboard box. The box is a special box — it either kills the cat or keeps the cat alive. But for just a moment, right before Schrodinger looks underneath the box, the cat is neither dead, nor alive. It’s both. It’s in a state that physicists call “superposition”. It’s both dead andalive. And all it takes is for Schrodinger to look underneath and see that his cat is dead. By looking into the box, the state of superposition collapses in on itself, and he kills the cat.

If this deal goes through, I’m a millionaire. Everything I’ve worked toward for the last two years is packed tightly into the pixels of this single email. But it’s not even my inbox. It’s Schrodinger’s inbox.

I’m not one to engage numbers with six zeroes. Or five zeroes. Or even four zeroes. If there are numbers with six zeroes in my life, they’re surely not associated with my bank account. More likely, they’re the number of opportunities I’ve missed, or the odds that I’ll ever be anything other than a high school dropout, or the number of miles I’m going to have to travel before I find myself.

If the deal goes through, and I open Schrodinger’s inbox to find that email with the contract signed and ready to launch, almost everything in my life changes. Without a doubt, it’ll change the way people perceive me, but in the end, I might still be that confused, misguided kid who couldn’t finish high school. I’ll just have more money in the bank, more of an excuse to justify why I didn’t live the life society expected of me.

The anticipation scrapes my mind, but I’m not one to stay with my finger glued to the refresh button, like some Hollywood version of Mark Zuckerberg. Instead, I wait until long after I know that I’ve already received this life-changing message.

It’s waiting in my inbox: Schrodinger’s inbox. Which means that I’m stuck in this state of superposition. Neither a millionaire, nor a non-millionaire. Neither rich nor poor. Neither with or without an excuse for leaving high school. Society accepts me, and scoffs at me. My parents are proud, anddisappointed. The last two years of my life are a violent waste of time, and a brilliant investment.