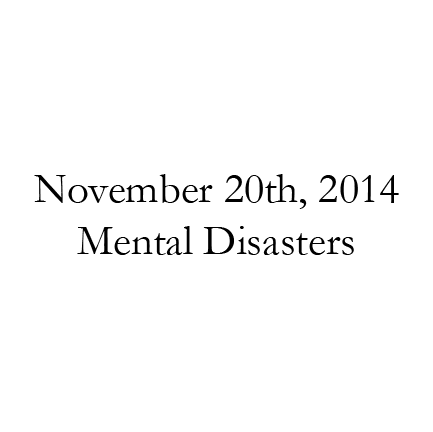 My body shivers and trembles like an earthquake when I realize that I may have done something quite irrevocable. It grips me unexpectedly and throws me to the ground or to the nearest chair. Sometimes it’s a park bench, sometimes it’s a pew, and sometimes it’s a sweaty basketball bleacher. But it doesn’t actually matter, because my stomach decides that it enjoys doing pushups and jumping jacks, and when that happens, it really doesn’t matter where you’re sitting.

I first experienced this mental tsunami when a series of irretrievable words slid between my teeth and into the mind of a girl quite close to me. Her reaction to my poorly crafted sentences was simple and almost as irrevocable:

And so I tried to. I really did. I put on my shoes and stood from her side and tried to nod and offer some version of “Farewell,” “Good riddance,” or “Thank you very much, I’ll see you later.”

Maybe if I’d paid more attention to my mental weather forecast, I would’ve remembered to bring a thought umbrella to keep my body from the shower of adrenaline and cortisol and the other hormones that get released when you’ve done something irrevocable.

But I never pay attention to the weather forecast. Before I got out of that girl’s apartment, that mental disaster started, and that adrenaline pulsed through my veins, like a practical joke that evolution had planned for me millions of years in the past.

“Are you okay?” she asked me, quite kindly, in exactly the way I would’ve never expected.

“I feel really sick,” I said, my cadence blunt and awkward, not what you would expect from a guy who had just attempted to break up with such a fantastic girl.

“Do you want some water?” she smirked, wryly.

That’s when my stomach started to do jumping jacks and pushups and leg lifts and lunges. My heart respectfully asked my intestines to refrain from tying themselves into Gordian knots (but they never do listen, do they?).

Mental disasters, like natural disasters, don’t follow guidelines or expectations. The moment you think you know what they’re going to do, they do the exact opposite. A cerebral earthquake may have knocked me off my feet, but a wave of mental thunder clashes deafened me; I couldn’t even open my eyes to see the flood sweep through this girl’s apartment. A swelling sea of twisted irrevocability carried us out the door, into the soft, torn, 2 a.m. air that glazed over the apartment complex.

She screamed, and so did I, but I heard neither cry, because the mental thunder had already deafened me cold.

Although I couldn’t hear the violent swells, or the smack of the surf against the concrete parking lot, my mind still rang with words. My memory replayed the monotonous drone of the weatherman forecasting a terrifying mental disaster — the one I ignored.

A more accurate rendition of this story might have ended right there, but at this moment, I wasn’t too worried about accuracy. I pondered, as much as one could while being swept away in a mental flood, if this disregard for the truth had been the cause of the disaster.

A beautiful scream shattered my musings, and my vision returned to see that courageous girl treading water. Despite my desire to leave her, I couldn’t resist the current pulling me toward her. Our bodies met, caught in the raging storm, and we huddled together, drenched in the terrifying uncertainty of what held us.

She looked at me, and I at her, through the salt in my eyes. Minutes passed before I realized that the storm had faded, almost as quickly as it had arrived.