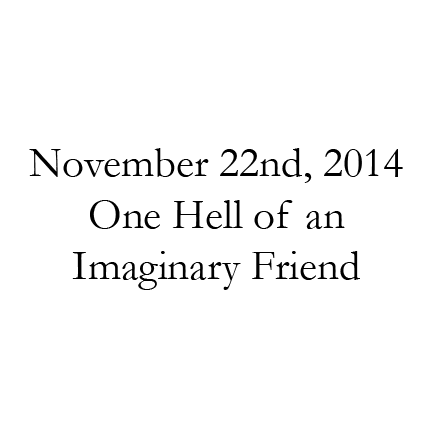 Yesterday, of all times and places, I thought it would be a good idea to check and confirm that I am, in fact, human. I’d always suspected that I was. I mean, what else would I be? But now that I considered it a little bit more seriously, I figured I should probably confirm it.

So I ran downstairs to ask the fat, balding man who owns the little shop at the corner. And while running down the stairs, I started to wonder if I really wanted to know.

What would I do if I found out that I wasn’t actually a human at all? What could I be if I wasn’t human?

By the time I got to the ground level, I’d considered the possibility that I was a TV character, or a hallucination, a computer program, a ghost, or a figment of someone’s imagination. There was also the possibility that I was living in a multi-verse, in which case, it really didn’t matter what I was here, because somewhere in the infinite instances of a universe, there would be a version of me that was human. But I didn’t get a chance to consider that before I got to the little shop at the corner. I ran inside.

“Marty. Hey, Marty!” I yelled, trying to get the attention of the fat, balding shop owner.

“Whattaya want?” He grumbled, not even looking up from unpacking boxes on a bottom shelf. Finally, he raised his head and saw me.

“This is going to sound like a weird question, but — ”

He looked at me, confused. I think he was trying really hard to figure out what I was getting at. But I was trying to figure that out, too.

He scratched his balding, round head.

“Hm. Well,” he huffed, standing and waddling over to the cash register. “I mean, as opposed to what? What else would you be?”

“A character in someone’s screenplay. Or a hallucination, or a computer program, or a ghost, or a figment of someone’s imagination, I suppose.”

He kept scratching his head. It made me uncomfortable.

He stopped scratching his head.

“I’ll be right back,” he said, and bumbled his way into the tiny kitchen. He returned a minute later, with a sandwich.

“Yours,” he said, pushing the plate toward me.

I considered how dedicated he’d been to scratching his head just moments before, and decided against partaking in the sandwich.

“Then you’re not a human,” he said, ignoring me and walking away.

He returned to restocking the shelf.

“Imaginary friends can’t eat sandwiches. Neither can computer programs or hallucinations, or ghosts. And you’re not funny enough to be a character in a TV show.”

He sat on the floor and continued restocking the shelf, one box after another.