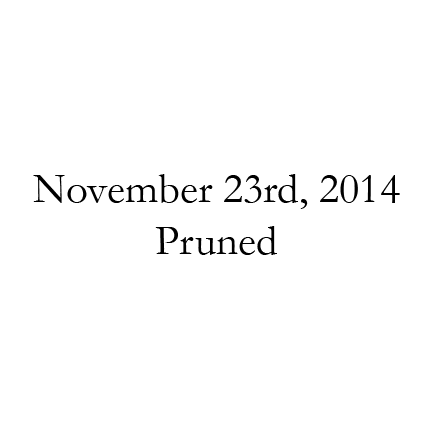 A gardener planted a young tree in his garden. The young tree grew and explored its height, reaching upward into the sky with its branches and downward into the earth with its roots. But with its attention concentrated on growing higher, it failed to produce even the smallest fruit.

The gardener came to the garden, and brought out his clippers. He pruned branches from the tree.

The young tree cried and sap poured from its wounds. As thin liquid dripped from its scars, he grew angry with himself for not trying harder to grow fruit.

Another tree, more experienced, taller, and older, tried to comfort the younger tree. He encouraged him, saying:

“From dust to light, it will all be alright. He trims you down so you can grow upright. Every time he cuts you, it’s only a chance to grow back stronger. So don’t be afraid of the shears, and don’t be afraid to be pruned.”

The young tree tried hard to grow fruit, but the seasons changed, and the next season drew harsh skies around them. The sun shone down on the garden, but the winter left a cold haze over his roots and the dry summer sucked the nutrients from the soil. The grasses and shrubs shriveled away. The tree tried and tried to produce fruit, but he, too, shriveled and grew dry.

The gardener came and pruned, confidently. Again, it hurt, but this time, the young tree budded with the confidence that when the next season came, he would deliver fruit to the gardener and the gardener would be happy.

The young tree let his wounds close over and covered his scars. He let his bark shake off the pain of the pruning and he grew. But as the cold weather faded, the tree lost sight of anything but the sun. He basked in the warm, bright light and drank in the rain, but his efforts in pushing fruit forth vanished.

The next season, the gardener came to the garden and pruned the tree once again. But this time, neither the soil, nor the lack of sun, nor the lack of rain had caused the unfruitfulness in this young tree. The tree alone bore the blame.

The gardener took the fruit from the other trees and collected it into a basket. But now, the young tree had no fruit to offer. Despite the rich soil and the healthy leaves, the tree’s branches held nothing that the gardener could use. So he took his axe, and cut it down.

The gardener chopped the tree into pieces and left them out to dry. The next season, he took them to his home, and burned them.