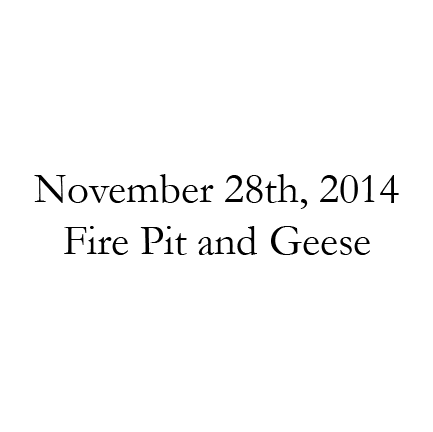 He stepped out of the house onto the back porch. The bitter cold from the fading month of November turned his breath visible. He stepped off the porch, and onto the hard, frozen ground, meandering to the fire pit. It drew him close, with a magnetic pull that he tried so very hard to pretend didn’t exist. He knelt and grabbed a piece of charred firewood, probably left over from one of his brother’s infamous parties. He collected scattered beer bottles and cigarette butts into a bucket.

A flock of geese bent the cold silence with a monotonous yawp. He looked up and saw them fleeing south, over the empty trees. Something about the geese made him stand and return to the house.

They were supposed to have a campfire in the backyard that evening, but they didn’t. Neither he, nor his mother or father or brothers were sure why. It wasn’t even important, honestly — it was just a damn campfire. They’d all stayed inside, next to the electric fireplace, placated by their smartphones and by college football. It didn’t matter whether they spent time together as a family around a campfire, or around a coffee table, did it? Of course not.

Besides, none of them really wanted to have a campfire, did they? It was all sort of a pre-established way for them to tell themselves that they’d spent time together as a family over the Thanksgiving holiday. So when anyone asked ‘What did you do for Thanksgiving?’ they’d each be able to say: “Oh, we had a family campfire in the backyard.” Instead of ‘Oh, we sat around in the living room.’ Who wants to say that? Nobody, that’s who.

But ultimately, who is watching? Who cares if they spent time together around a campfire, or around a coffee table? It makes for great Facebook pictures, or Instagram photos, or tweets, though, doesn’t it? He could just imagine it: all five of them, huddled around a glowing orange fire. How many likes on Facebook would a picture like that get?

But it didn’t matter, because that’s not what they did, anyway. They sat in the living room, circled around the coffee table. He sat with them, half-reading a book, half waiting for a conversation to arise. All the fragments of conversation that could’ve sparked to life dwindled and flew across his thoughts, like that flock of damn geese that had vanished south.

His father stood and looked through the blinds, then muttered something about how warm and toasty the electric fireplace was.

“Nothing like that campfire. How cold was it during the last campfire you made, Max?”

The older brother hardly looked up from his phone.

“Well. We had a cold front this weekend. A lot colder today than it was a week ago. How many campfire parties have you had this season?”

The father delved back into the intricacies of the cold front, and the eldest brother’s social habits. The TV flashed and flickered as one team scored, and the flat conversation tilted toward the vitally significant outcome of the evening’s game.

The living room waited patiently, for words to form conversations, and for the family to spark the conversations with life. The fire pit waited, too, to be sparked to life and circled, just like the coffee table. But neither was brought to life.

He watched as the older brother lifted his phone, snapped a picture of the family, and posted it online.