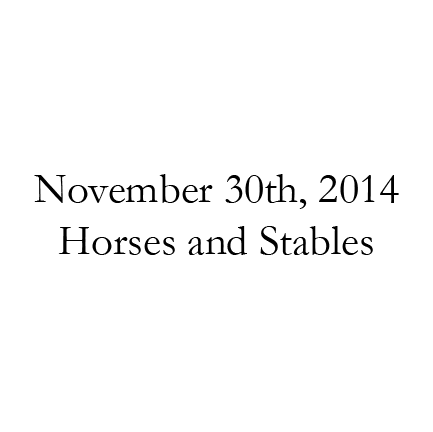 The highway buzzed and rolled softly, caught somewhere between the low crash of a distant ocean wave and the annoying squawk of a honking horn. The truck drove heavily, dragging the horse trailer behind it like a lumbering train. She watched her older brother grip the steering wheel, and pretended that with every subtle twist and every press of the pedal he was guiding them into distant space. She leaned against the passenger window and stared at her funny, distorted reflection in the wing mirror. But her own expressions grew boring and dispirited, and she turned her eyes to the massive trailer dragging along behind them.

“How much longer?” She asked.

Cecilia gazed back out the window, her thoughts wrapped up in the intricacies of loading the horse into the trailer. Her brother showed her how it worked, how to get Evendim loaded and secure.

But Evendim radiated a stubborn, almost bitter fear, with every tap of the rope on his side. She’d watched the entire prolonged episode, all six hours of her frustrated brother swearing and fighting to get Evendim into the trailer. He’d started at ten in the morning and struggled for hours, until he spat out one glory of a curse word, one that she’d never heard before, and threw the ropes on the muddied drive. He stormed into the kitchen, tracking mud all over the floors, and sat to wolf down a meager lunch before trying again to coax the stubborn equine. She crept into the kitchen, and sat across from him as he ate in bitter silence.

“There are videos, on the internet, of horses. Showing how to load them.”

“Not gonna work,” he huffed, his mouth full of lunch. “Fucking horse is a brick.”

He chewed angrily, and stared out the window, as if he’d said the words to himself only. His temper faded, sluggishly, and as he finished, he turned to her.

“If you were a horse, you wouldn’t do that, would you?”

“Take two hours to get on a trailer.”

“No,” she muttered, soured and confused.

He stood and put his plate in the sink. He’d tromped outside again to the drive, and spent the next several hours coaxing and swearing until the horse finally boarded the trailer.

Cecilia’s phone rang loudly, cutting through the low, monotonous hum of interstate traffic. She looked at the screen and muted it.

“Just because she left, doesn’t…” He drifted off. “You gotta talk to her eventually.”

She smirked, making another one of those funny, distorted faces, only this time, without the mirror.

“You can’t keep ignoring her.”

“You shouldn’t keep pressuring me.”

Almost as a response, he pulled the truck off at the next exit and into a glowing Exxon station. The bright lights overhead were flocked and muted with moths, and Cecilia peered over the door at the splotches of years of gasoline waste. She let her eyes wander, further, past the gas station and the awkwardly placed restaurant. Acres and acres of dark, roaming pasture extended behind the tacky roadside fueling stations, the comfort stops and the unbecoming billboards.

He stepped down, and walked across the wide lot to the storefront.

A tentative curiosity sprouted in her thoughts, and she turned around in her chair to look at the massive equestrian trailer. She opened the door and hopped down. She stepped—cautiously, quietly—to the back of the trailer.

She gripped the trailer door lock, and swung it around, releasing the clasp. She hesitated, but just for a moment.

She let the door fall to the grimy concrete, and the horse stepped out, slowly at first, then at all once. The horse hesitated, but like her, only for a moment. It galloped forward.

Cecilia tapped her phone, and called her mother.