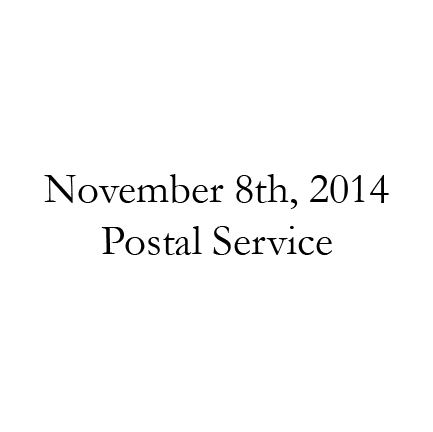 The sad part about the whole thing is that we used to make jokes about it. “Don’t go postal!” or “Mike’s goin’ postal!” It was funny. We all laughed. It seemed okay to do that, because it seemed like an okay place to work. I never thought I’d say that about a post office, but it really was. Really.

When I first started working there, the office didn’t seem claustrophobic or imprisoning. Enthusiastic determination fueled the office, and the veteran mail delivery drivers let it carry them as far as it could. Usually they didn’t need anything else, but there were some exceptions.

Francis came into the office every morning with a massive mug of coffee. That was his exception, really. He’d lumber over to our shared desk and comment on how early it was, or how little sleep he’d gotten. Either that, or he’d say something about how he’d be dead without coffee. He acted like he worshipped coffee, he really did.

This morning, though, right after he tramped in and conducted his morning routine, he dove right in to an intricate recollection of the previous day’s events. This happened—not often, but enough for us to coin a phrase for these occurrences:

“Had another ‘shoot the messenger’ yesterday. You won’t believe this.”

I didn’t need to ask him to tell me. He would have told me, even if I’d asked him to shut the hell up.

“Yesterday, I’m opening a mailbox, deliverin’ a bundle of letters. Some of ‘em, probably bills n’ stuff. But anyways. This guy opens the door and starts yellin’ at me, wavin’ a package in his arms like it’s a fucking pitchfork.”

“Yeah.” Francis took a swig of his massive coffee and continued, using a muffled voice for his impersonations: “Starts yellin’: You son-of-a-bitch, you delivered the wrong package, you son-of-a-bitch, what the hell? And I tell ‘im: I’m just the guy who brings it from one place to another. Don’t blame me. I just deliver to whereever the package says. It says 134 Hickory Lane, I deliver it to 134 Hickory Lane. It says 8623 Dashmore? I take it to 8623 Dashmore. Simple. Don’t shoot the messenger.”

“Don’t shoot the messenger.” I muttered, and looked back to the stack of papers in front of me. Francis took one more massive gulp from his coffee, and got back to work.

I felt like that was the beginning of the whole mess of things. The next day, the weather closed down on us and decided to make life hell for the next seven days. On top of that, Stinson gave us both a dozen extra streets. I tried to tell him that the extra streets were just going to slow us down and screw things up right before the holidays, but he wouldn’t have it. He’s one of those stick-in-the-mud tightasses—I wouldn’t be surprised to find out he’d tattooed the Post Office Creed on his wife’s neck. Stinson has the Creed on at least half a dozen plaques and signs in his office. Really, he does.

But I got used to that. I adapt quickly, I do. I found the most efficient way to take the route, and that day, I was actually ahead of schedule. Ready to finish twenty minutes early. I got a call from Stinson, telling me that he had two more loads of mail and deliveries for me to take out before I could wrap for the day. And that did it. It really did.

I drove home, got my Magnum out of my drawer, and drove to the Post Office. Suddenly, all those times Francis joked about “going postal” became extremely funny. I smiled when I walked inside, and realized how claustrophobically tomb-like our offices were.

Francis was already at our poor excuse for a shared desk. He looked up, bringing that massive mug of coffee to his lips for the last time. The steaming beverage ended up splashed all over the wall. I found Stinson, and shot him, too. His wife would become a grieving widow, but at least she would be left with that fucking Postal Creed, tattooed across her neckline.

I thought about what I might’ve told Francis if I’d had to explain it all. Maybe I’d just have told him it was a “shoot the messenger.” He probably would have just taken a massive gulp of his coffee and nodded.

I walked out of the post office. The police swarmed around me, yelling and screaming all kinds of ridiculous things. I turned the gun to my head, and pulled the trigger.