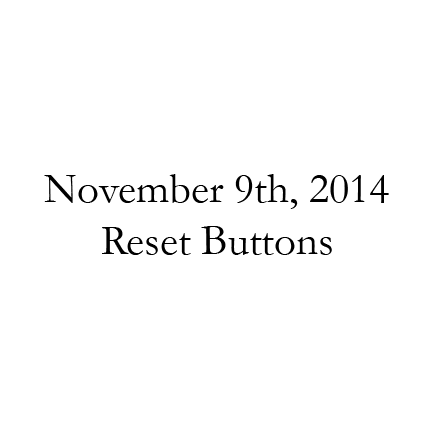 My sister had a toy that recorded your voice and recited your vocal intricacies back to you. Mini-You with Your Voice, Too — a smiling doll with a simple audio recorder inside. She spent hours and hours recording her own voice into this little doll, adjusting the settings and altering the voice to sound exactly the way she wanted to. She modified her young, pubescent voice to sound smooth and silky, like Julie Andrews from The Sound of Music. She loved that movie.

But I never liked that movie. All that spontaneous singing and dancing, and all those Nazis running around never interested me. Recording and altering my voice never interested me, either. One time, I got a hold of that stupid doll, and pressed all of the buttons. My sister’s garbled words jumbled together, like lines of twine twisted in knots.

Instead of untangling those voices, I turned the doll around and found the reset button. It was one of those small buttons that required twisting with a penny. So I dove my hands into my piggy bank and pulled out a stack of coins. In a single twist of the button, I erased hours and hours of my sister’s voice recordings. She wasn’t too happy about that.

Years later, long after I’d forgotten about reset buttons and the Mini-You with Your Voice Too doll, I moved away from the tiny suburb that had kept me confidently cradled in familiarity and comfort.

I imbibed the city’s swell of loud voices and jumbled soundtracks, everyone walking and jogging and swaying to their own rhythm. I became one of those voices, adding words to the frenetic tapestry of noise. Just another voice in the fray.

The problem with the city is that there’s no reset button. There’s no way to pause and scrape everything away, wash it clean, erase, and start again. In my small apartment, tucked away in a corner of the city beside a grimy movie theater, a sketchy nightclub and an overpriced Thai restaurant, the voices and noise twisted together like metro lines on a subway map. They formed an indistinguishable soundscape: The sounds of my neighbors arguing, late into the night. The sound from my other neighbor’s TV set, starting early in the morning, blasting out a broadcast that was no doubt happening in the same city, a dozen streets away. Traffic roared below me, and the subway roared below it. The restaurant clanged and the theater boomed.

The dirt and hot grime of the city can be washed, as long as you have the money to clean it. To hit the reset button. To buy yourself a clean apartment in the cleanest part of the city, with a comfortable car and a kitchen that doesn’t have roaches or rats. But there’s no reset button for the vast, intricate soundscape that twists your thoughts and words into Gordian knots.

I found myself scrambling to get more of the thing that I’d always used to reset that creepy little doll that my sister owned, in hopes that it might let me reset the warped noises that infiltrated my world. Coins. Money. I knew if I had just a little bit more money, I’d be able to clean things up and maybe start again. That was my ticket to resetting everything. It made sense to me. It started to become the only thing that made sense to me.

And although all it took to reset that doll was a twist of a penny, I found no way to erase the stress and mental strain of the city. Even with all the money that I could gather, there was no escape.

So I did exactly what my sister did, before I hit the reset button. I began to change my voice, my thoughts, so that even though I added to the fray, at least I added a voice that sounded more harmonious. I changed the way others heard me, and the way I heard myself, until I hardly recognized the words that I said, or how I said them.

I looked in the mirror, heard my voice, and recognized nothing. It sent me scrambling for a reset button, more panicked that I’d ever been in my life.

But there is no reset button.

This city doesn’t have a reset button.