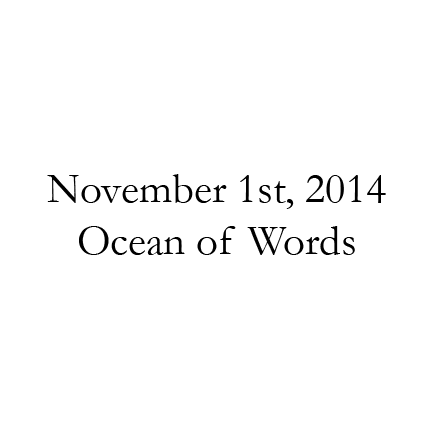 The shores of New England offer their rocky coasts to the ocean, and the waves wash over them, softly, yet unrelenting. Words are only thing that I’ve ever seen carry the same strength and consistency as the sea. But that frightens me, because I’ve seen what the ocean can do to someone. I saw what it did to my dad.

Something wild and rabid had infected his eyes when he returned from his first voyage. His friends had wasted hours trying to convince him to join them. And although they never could convince him of anything else, I think that the ocean pierced his curiosity with a dull hook and pulled him in. The words of the other men washed over him repetitively and convinced him to join them, just like the ocean would have.

He grew obsessed with the sea, as if there was something he could find on that flat, salty expanse. The second voyage lasted a week. The third voyage lasted two. My mother threatened to leave us all when he declared that he would be absent for a month. But in his mind, he was never absent. He was absent when he was not at sea: The sun beating down on him, a layer of humid salt surfacing his skin and his hair, making it glisten when he climbed the rigging.

That memory was the one that imprinted in my mind, like the footprints that he left in the sand. He didn’t give me a hug when he left; instead he gave me a doll twisted from ropes, and kept telling me that he would be home soon. As his words grew less true, my hope in them grew stronger. Words are like waves on the sand. They wash over you, and shape you, taking a little piece of you with them each time they swell forward. And eventually, you begin to realize that you can’t fight them. The only way to escape the vicious cycle is to surrender to it. I held onto his words for a long time, but finally, I let them go.

I learned to live without him. I grew to become a mother, taking care of my brothers and sisters. Sometimes, I even told them stories about their dad.

The ocean was never meant to bring anything back. That’s why people cast chains into the sea, or rings, letters.

It was cold the night he returned. I’d started a fire and paused to warm my fingers before going back to see the young ones to sleep. He pushed the door slowly open, and the hinges released a long whine. I looked up. I didn’t even recognize him, until he said those words.

A feeling of terrifyingly fleeting prints in a wide beach of wet sand washed through my mind, just like his words. I waited there, for my mind to recognize him, but it failed.

His face had grown sunburnt and dark, wrinkled and covered in hair. His hands bore cracks and tattoos and rough blisters—nothing like the hands of the land-chained man whom was once my father.

He stepped toward me, and reached to embrace me. To give me that hug that he had kept this whole time, maybe wrapped around his neck like a pendant on a chain. I recoiled.

I screamed, and told him to get out. My mother came to the room, and the young ones, too. But he swung to door open and left before they realized what had happened.

The ocean offers danger to every man who challenges it. Storms erupt and tear the sky apart, but you see them from a long way off.

For months, he visited us. Sometimes every week. Wearing us down with his words like waves on the beach. But he was different. The man who had promised to return had remained at sea, and was replaced by a vulgar, sickened wanderer.

For a year, he tried to convince us that he was still our father, until one month, we never saw him again.

A grizzled seaman showed up one day at our home, and told me that my father was ill. That his days were short, and that he wanted to see me, one more time. I agreed.

I walked into the drafty shack, distant and removed. The hallways smelled of salt, sweat, and vomit. He lay on a cot, wet and empty. His leathery skin had grown clammy and white, but still faded under the years of violent sun.

“Adele.” His voice was like the soft, soothing swell of waves on the beach. Nothing like it had been before his voyage.

I could say nothing. I just shut my eyes, and tried to restrain the storm of anger and grief and all of the missed moments that would never return to me, just like rings tossed into the ocean. I felt tears dripping down my cheeks.

Words are like the ocean waves—with time, they tear down the strongest things and the most brittle of promises. They break you, or drown you, or cover you, or bury you. And they can set you free.

He died one day later. The few sailors who knew him took his body out to sea, and let the ocean take him in.

Eventually, you begin to realize that you can’t fight words, or waves, or any part of the ocean. The only way to escape the vicious cycle is to surrender to the infinite sea. I held onto his words until my fingers grew tight and torn and cracked with salt and burnt with sunlight.

But finally, I opened my palms to the wind, and let the ocean take them from my fingers.