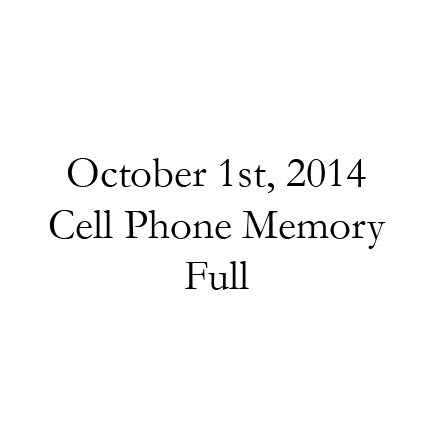 He stepped into the Verizon store, cradling his cracked phone. The store buzzed with activity (if you want to call voracious sales efforts activity). His screen bore a divisive crack, splintering like spider webs across its face. It stared at him.

When he was young he always had the hardest time understanding that phones don’t actually talk, so he always imagined that they did. That each phone had a voice of its own.

“Alrighty. Any idea what kind? We have a great Samsung LTE model on sale this week.”

He shifted uncomfortably. Salesman should only be allowed to sell to people who aren’t planning on buying — if they sell to people already there to buy something, they’re just annoying, he thought. He thought about it a little bit more. The only thing more annoying than being sold to when you’re already buying is being sold to when you’re not already buying. So really, the only solution is for salesman to just leave you alone entirely.

“Something very similar,” he said. “Except with a better camera, maybe.”

“Great,” the salesman charmed, “Step right this way, and we’ll get you all set up.”

He waited, watching the customers browse the selection of smartphones and tablets and other commercialized, idolized distractions. Over in one corner, a pandering sales associate was explaining texting to a frustrated, aging man. In the other corner, a couple of toddlers tapped on several screens simultaneously as they waited impatiently for their father to finish upgrading his phone. His hands moved instinctively for his own device, but it was hidden behind the counter, transferring data to his new replacement.

“Do you want to save any of these photos? Or the voice messages?” the salesman asked him.

The salesman handed him the phone.

“Just select the ones you want to keep, and delete all the others. I’ll transfer it over to your new phone.”

He grabbed his phone, and started to scroll through the pictures. He’d saved far too many — pictures of dinners and breakfasts he’d eaten weeks ago, pictures of crazy escapades his friends had enacted, pictures of family events. He deleted the stack of pancakes from last week’s breakfast. He deleted the double back-flip pool dive that Gregory had dared to endure last January. He deleted photos from Thanksgiving, from Christmas, and one random one that happened to be taken on Martin Luther King Junior. Day.

But he didn’t stop there. He deleted the dinner at that new restaurant that just opened downtown, the sunset over Venice Beach, the mountains on the Blue Ridge Parkway, the Red Bull aluminum-can sculpture his friends made, and the fire-juggling circus that performed downtown. He deleted his family at the beach, the evening with his grandparents, and the most recent time he spent with Emma. By the time he got to the end, he’d forgotten that he wanted to save any of them. He looked up, and handed the phone back to the salesman.

“I thought you wanted to save some pictures?” the salesman asked, confused.