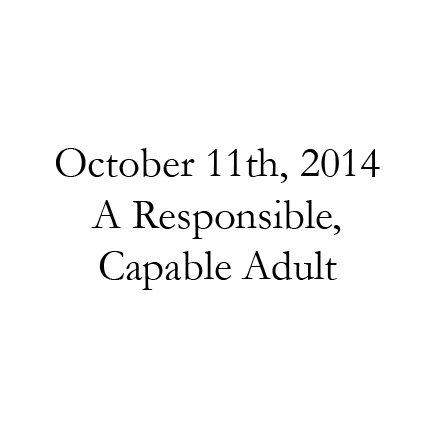 Every parent has a special tool that allows his or her children to be responsible and capable. Every parent is supposed to pass it on to their kids when they reach the tender age of seventeen, right before they graduate high school. The only problem is, mine forgot.

It’s not uncommon. Parents forget to give this tool to their children, which singlehandedly explains the number of irresponsible losers who populate many systems of higher education. But they almost always find a way to give it to their children as soon as they can. If the kids don’t get it before they graduate high school, they usually get it before they graduate college, or before their first legitimate job.

I’m not sure why mine forgot. Or if they even did forget about it. It concerns me, though, because I’ve been out of college for almost a year, working as an intern in some corporate coffin box since I graduated. I look around me when I’m at work, or on the sidewalk, or at the coffee shop, or with my friends, and everyone seems pretty damn responsible and pretty damn capable, and that’s what makes me quite certain that I’ve missed something.

So I thought I’d remind my dad to give this mysterious tool to me, to pass it down, now that I should be well on my way to becoming a responsible and capable adult. My parents have given me many things: They gave me a pair of bright blue eyes and a curly mop of brown hair. They gave me a subtle hint of their New England accents, they gave me a place to live for the first eighteen years of my life, and a place to come back and visit after that, if I ever needed it. But I don’t need it. Not right now, anyway. I need to be an adult, and I need to be responsible. I need to figure out what I’m doing with my life, where I’m going, what I’m good at, and who might pay me to be good at it. I need to figure out how to not spend the rest of my life alone, or working in a tomb of corporate cubicles.

So on a long weekend over Labor Day, I took the train out of the city and visited my parents’ old house, lodged away in the cozy streets of suburbia. Childhood memories flooded back to greet me, and ran after my car as I drove down my old street and into my old driveway. But I wasn’t there for my childhood memories. I wasn’t even happy to see them.

The evening slid by, and I spent dinner catching my parents up on all of the things that I filled my time with, and what it was like to work on a corporate shelf. Finally, I ran out of things to tell them about.

“Dad, do you have something to give to me?”

My father’s unassuming figure leaned over his plate at the kitchen table. Years of hard work had worn his hands smooth and wrinkled his face. He looked at me, quizzically, but I had a feeling he knew what I was asking.

“You know, like the tool. The tool of responsibility?”

“The tool of responsibility?”

“The tool that makes people responsible. And capable. Everyone has one, and they all got it from their parents.”

My dad’s eyes slowly tightened, and his forehead creased. His memory rarely failed him, but he had a bad habit of not bringing things up unless they were fundamentally urgent, and I was certain that was what had happened. I carried a hint of fear that he would shake his head and say, “Don’t know what you’re talking about.” Or that he would claim to have given it to me already. I bit my tongue, and waited for him to raise his eyebrows and tell me that it was in the top drawer of his dresser, ready for me to take back home with me, and that it would make me capable and responsible, and fully proficient at life.

He raised his eyebrows and directed his eyes at me.

“Oh,” he said, with a hint of disappointment. “My father never passed it down to me, either, so I don’t have one to pass down to you.” He stood, grabbing his plate and silverware from the table with his dry, worn hands.

“All I can say is, just do the best you can, and things might work out all right.”