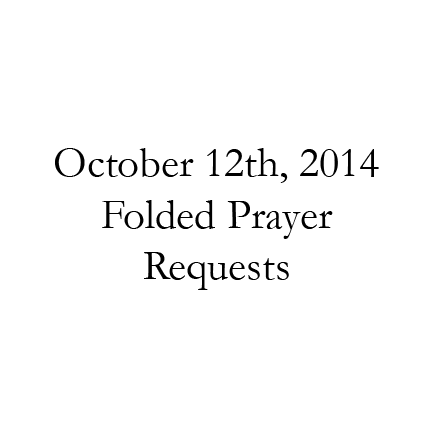 If you had you asked her, she would have told you: “I hardly know him,” except instead of saying “him,” she might have said “that loser” or “that weirdo.” Mike carried a brief uncomfortable stillness with him, deep in his pockets, as if he were immune to the day-to-day excitement that high-schoolers can sometimes feel. And it was true that she hardly knew him—even though he was her ride to prayer group every Wednesday night.

If you had you asked him, he might have told you: “I don’t mind the inconvenience of picking Leah up before prayer group. I’m headed there anyway.” But of course, what he really meant was: “Every week I look forward to Wednesday nights, so I can feel important, or, at least, useful, to someone.”

She never went to prayer group because she wanted to. But he did. For her, it was just one of those things that was easier to do than not, and her parents expected it. They were the ones who’d arranged for him to pick her up every Wednesday night. She didn’t mind it that much, even if he was a little bit odd. He was a little older than almost everyone in the group, and about two years older than her. But he’d been a Christian longer than anyone in the group, even the prayer group leaders, which made him, in some ways, the most experienced one there.

“Write down a prayer request, and once you’ve written it, fold up the note card and put it in the hat,” said the prayer group leaders, passing around note cards and pencils. “Then we’ll pass the hat around and everyone will pick a card, and you’ll pray for that request this week.”

She harbored a private cynicism toward everything that happened in prayer group, but kept that a secret. She grabbed a note card and tried to think of something tame, yet interesting enough to seem authentic. “Please pray for my school work, it’s stressful.” That might be a good one, if everyone else wasn’t writing it, which she was certain they were. “Please pray for my grandmother, she’s in the hospital.”. That was a good one, too. Grandmothers and grandfathers were always good subjects for prayer requests.

She looked around and wondered how many other people would request prayer for their grandmothers or their schoolwork. Devin probably would. Kyle probably would. Chelsea, and probably Samantha too. But she wasn’t sure about him. He would probably take this prayer request game so seriously that he’d write down some kind of deep spiritual struggle. The only reason he might not write that was because she doubted that he’d ever struggled with anything—he always seemed so calculated and calm. It was that uncomfortable stillness.

Before she knew it, everyone had written their requests, put them into the hat, and started passing it around. She quickly jotted something about her grandmother onto her notecard, crinkled it up, and tossed it into the hat. Samantha passed the hat to her. Leah grabbed one of the prayer requests and passed the hat along. She unfolded it and read the scrawled graphite words.

Pray for me to not feel lonely, and to make some friends.

She knew it was his—he would be the one person to not ask for prayer for his grandmother, or for his schoolwork. She wasn’t sure what the point of writing your prayer request down and putting it into a hat was, but she couldn’t imagine him saying his request out loud to the group, so he definitely took advantage of the artificially discreet disclosure method of sharing.

“Alright everyone, be sure to pray for the prayer request that you drew this week, and we’ll see you all next Wednesday!”

“I drew your request,” she said, during the ride back.

“You don’t have many friends?”

“Then why did you ask to not feel lonely in your prayer request?”

“Um. Well. Because sometimes I feel lonely. I guess.”

He paused, letting the silence and his uncomfortable stillness wash between them. She waited. Ten seconds, twenty seconds, thirty seconds. Finally, he’d run out of silence, and words stumbled out of his mouth.

“I guess I don’t. I don’t have that many friends. I guess I’m sort of different than most people.”

She raced for an appropriate response. “You’re not that different” would be a good one, but it would also be an obvious lie. “It’s okay to be different” might work, too, but she didn’t want to say that. “You’ll make friends” sounded cheap and motherly and frankly, uncomfortable to say.

“I’m your friend,” she blurted out, finally. But immediately after, the weight of silliness dropped over her shoulders, and she felt ashamed to have even felt she might be able to solve any of his problems.

He pulled into her neighborhood, and onto her street, and into her driveway.

“Thanks for the ride.”

She stumbled for some kind of less awkward farewell, but words crowded her mind.

“I’ll pray for your prayer request,” she said, as she stepped out of his car.