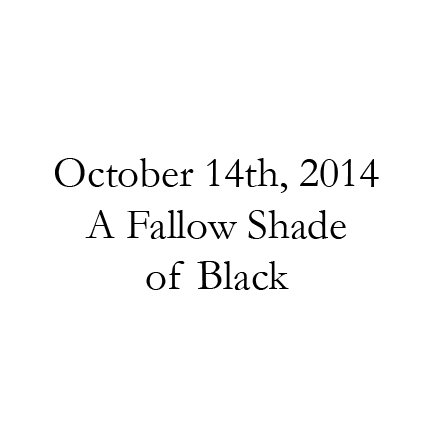 Become a medical student imprisoned at the University of Florida? Blue. Join the army of Wall Street investors and penny-pinching money counters in New York City? Green. Architecture school? Black. Become a viper-sharp lawyer, then settle down and marry an attractive woman in Charlotte, North Carolina? Yellow. Dentistry? White. None was wrong, and none was right, as far as I could tell. I kept looking around, expecting someone to give me a hint about which color would suit me best, but no one ever offered insight into the right one to choose.

If none was more wrong than another, then couldn’t I merge two and get an answer that was twice as right? If I mixed yellow and red, wouldn’t that give me a vivacious streak of orange? Just like mixing yellow and blue conjured a sapient green, or adding blue and red mustered a vibrant purple? I shied away from the idea that the paths led opposite directions, and instead decided that any two choices that I could make might take me parallel to another, and that I’d always be able to glance over and nod to the friend of mine who’d decided to take one of the other choices in life.

So, just like mixing paint, I took two of the brightest shades and a thick brush and blended two colors together. I started to paint a picture of something, but forgot what I was painting, and the color dried out. I tore the paintbrush from the mound of hardened paint, and some of the brush hairs clung to the pallet.

Believing I could have any colors I wanted, I gathered up a large scoop of blue, one of yellow, and one of red, and mixed them all together into a beautiful and ferocious blend of life.

And as it became more vibrant, I added more colors. But they started to disappear and fade, so I added more. More blue, more green, more vivacious yellow and furious red, until they all struggled with and battled against and bled into each other, and I was left with nothing. I was left with grey. Fallow, weak, empty.

Instead of having all of them, I had none of them. Instead, I had a shade of black so disgustingly soft and grey that you would hardly know it exists.