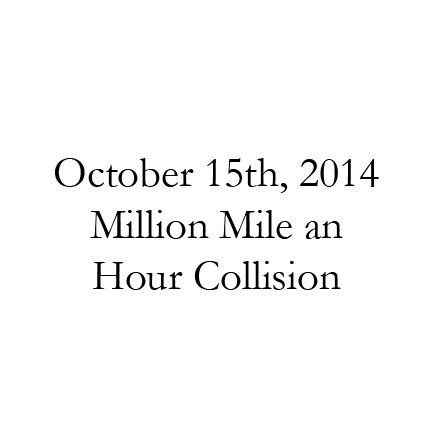 We all knew that this day had been speeding toward us at a million miles an hour, but none of us had known what the collision would look like. We didn’t know it would look like this: finding myself looking down over the open floor of the convention center lobby, from a private conference room. Seeing my father, the candidate, the politician, the challenger, the underdog, swamped and surrounded by hordes of reporters, all asking him what it felt like to lose the race.

“What is it like to lose?” That’s such a terrible question. I wanted to be down there, next to my dad, grab the mic, and tell them: “You all know what it’s like to lose! Now get the hell out of our way!”

And that might be why I’m not a politician.

My father claimed that when he was my age, he was as hot-blooded and as zealous and I am now, but I have a hard time believing that. If that were true, he wouldn’t be in the middle of half a dozen interviews, and two different TV crews.

I watched as my father calmly answered one question after another. The conference room remained eerily hushed, despite the presence of my father’s campaign team—the ones who’d lived in the trenches with us, volunteering every ounce of their time, every fragment of their lives toward getting one man elected. There were middle-aged mothers and teenage rebels, elderly whippersnappers and tech-savvy entrepreneurs. They all believed that my dad had the fire to get elected.

“Do you want to say anything, Jay?”

My thoughts scattered, and I realized I’d forgotten where I was. I tore my eyes away from my father’s ambush on the floor of the convention center and looked up. Paxton Holmes, my dad’s campaign manager, stood beside me and readied a microphone.

“Do you want to say anything? To the team?”

My mind raced for some words of consolation, but my mental acceleration sputtered dry. I tapped into my mind’s reserve, where I thought I’d find some encouraging sentiment I’d saved for situations like this—an inspirational speech on tap, available at the press of a button. But my mind was empty, and so was my mental reserve.

“Sure,” I heard myself say, reaching out to grab the mic. Paxton handed it to me and nodded.

The silent eyes of the campaign turned to me, slowly, as they realized I had something to say, and I realized I didn’t. They were the pulse of the campaign, its blood vessels, its heart, its brain. They’d bled and breathed and sweated for this day, but it somehow, almost inevitably, ended in a collision.

I opened my mouth, and tried to offer a positive outlook on this head-on collision.

I started by saying something awkward and uncomfortable, a lame expression of gratitude spread across the entire team, like a band-aid that isn’t quite big enough to cover the scrape, or an umbrella that isn’t wide enough to keep the rain off your back.

The words stumbled out of the microphone and away from me, projecting through the large room, which amplified every waver and mistake and insecurity in my voice.

“We believed in this. We fought for this. And no one can take that from us.”

I handed the microphone back to Paxton, and he put it down. My words hardly reached the distance that I’d wanted them to go, they hardly stretched as far as I thought they could. I turned back to the floor of the convention center and watched the reporters flock for a series of words that made sense for the circumstances. Just like me.