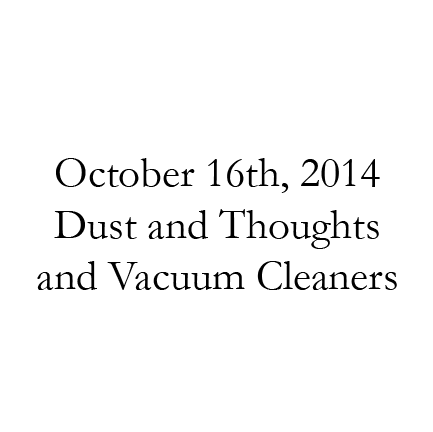 The janitor in my office vacuums the floor until the extension cable pulls taut and the cord snaps out from the outlet. For several weeks in a row, I jumped up and plugged it back into the wall for him, so he could keep going. But then I realized: he lets the cable snap out of the wall on purpose. It’s sort of an abrupt way for him to know that it’s time to move on, I guess. And he’s just too shy or too timid to tell me that. Every time I plugged the cable back into the wall, I kept him from moving on to the other part of the room.

He’s a foreign man. I don’t know where he’s from. He’s short and thin, and has an insecure smile that he uses far more than I’d expect him to. He speaks in a high-pitched chatter that I usually fail to understand. Maybe he’s from somewhere in Africa. My coworker thinks Jamaica, but I don’t think so.

They vacuum the same way—they vacuum one side of the room until the cord gets yanked out of the wall and shuts the vacuum cleaner off, and it can’t reach any more of the room (or my mind), and then they move on. The only difference is that one of them vacuums up dusty thoughts and distant memories, and the other vacuums up office lunch crumbs. For the longest time, I tried to help them both in the same way: when the cord of the vacuum cleaner snapped out of the wall, I’d hop up and plug it back in. The janitor inside my head would nod and smile and pretend to be grateful, but he’d stay silent. He’d clean the same part of my mind that he’d just cleaned.

The janitor inside my mind is foreign, too, but I have even less of an idea where he might be from. He rarely speaks, but when he does, I understand him even less than I understand the janitor in my office. They both clean the floors diligently, and the windows, mercilessly. Day in and day out, because everything keeps getting dirty again.

“Why do you do that?” I asked my office janitor one day.

I looked at him, confused.

I motioned to the power cord, and pointed to the plug on the wall. I plugged it into the wall, and then yanked it out.

He smiled that insecure smile and said something like, “When it unplugs, I move on. Further.”

He pointed rapidly and repeatedly to the other side of the room.

“Have to move to reach. Reach further.”

I nodded, bored, and glanced back to my computer screen.

The janitor vacuumed again tonight, and when the power cable snapped taut and dropped out of the wall, I felt an instinct to get up and plug it back in. I stopped myself, though, and instead I watched the thin, funny man drag the cord to the other side of the room. He plugged the vacuum cleaner into an outlet, and kept on vacuuming, with the full knowledge that he’d do it all over again tomorrow.