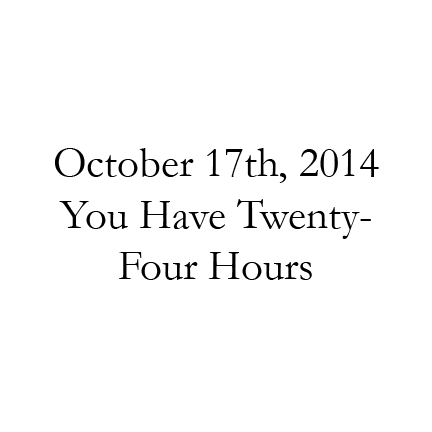 You have twenty-four hours. No more, no less. So what do you do? You try to plan it all out. Get more and more specific. Down to the minute. Down to the half-minute, even.

But at a certain point, you start to realize that you’ve just spent the first hour of your twenty-four hours planning what you’re going to do with the next twenty-three hours. So you settle down, and decide that you can’t spend any more of your time planning. You’ve got to start changing things. The sun has already gotten an hour higher in the sky, the grass has grown an hour higher, and the people around you are an hour older than they were an hour ago.

You’re not quite sure what’s expected of you at the end of those twenty-three hours, or even if there is anything expected of you. And if there is something expected of you, you’re not even sure who expects it. Maybe your grandparents expect you to be just like your parents. Maybe your parents expect you to be just like them. Get A’s in all of your classes, graduate high school and go roaring into one of those top colleges, ready for medical school, or law school, or business school.

Or maybe they don’t expect any of that.

Maybe your parents and your grandparents hardly have any expectations at all. Maybe your friends are the ones who weigh you down with expectations. They expect you to be there for them, to call them back, to bail them out. And you’re glad that they expect those things from you, because if they didn’t, you wouldn’t know what to do with yourself. Thank God for expectations, because without them, you wouldn’t know where the hell you are. They’re like a GPS that tells you your estimated time of arrival is in twenty-three hours and seven minutes.

But you only have twenty-three.

Your friend’s expectations aren’t overbearing. They make you feel important, and you like that. It’s the expectations you have for yourself that scare you.

You only have twenty-three hours, and not a minute to spare, and you’ve already spent the first hour of your time planning. But the expectations that weigh you down, whether shackles and steroids, warp your plans until they are not yours at all.

You have twenty-two hours and fifty-nine minutes.