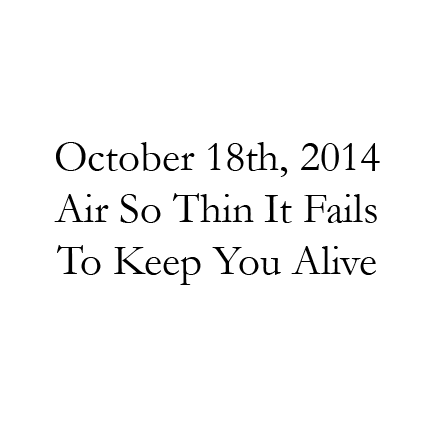 He gasped the thin, cold air. His eyes scanned the broken earth. He’d forgotten much of what happened since the fighting began, but that didn’t concern him, because that always happened. Whenever violence erupted, the minutes seemed to melt together in a frenetic, ethereal blur. It terrified him—not because he was afraid of dying, or afraid of killing, or of arrows or swords or pain. It was a searing fear of entropy that gripped him stronger than even his instinct for self-preservation.

There was no order to how anyone lived or died once the violence began. When they were children playing games with sticks and rocks and leather armor, they used to say it was whoever wanted it the most.

A figure appeared over the rocks, and Ivar raised his bow. The man raised his empty hands. Ivar waded through his muddled memory and recalled the man’s name.

Erik walked closer, and lowered his hands. Ivar let his arrow down. The thin air tore at his throat the same way his mind scraped his subconscious for the memories of recent hours.

Erik stepped forward, surveying the dark crimson ground and the scattered bodies of what were once men.

“None deserved this. Poor bastards,” he muttered, under his breath.

“You can be the one to bring the news of their deaths back home, not me.”

Erik wiped the sweat from his face and his running nose, and lumbered away from Ivar, disgusted.

Ivar’s mind twisted and rolled, and he fought to restrain himself. His memories rippled, turning inside out, reaching for something valid and real. He was sure that even if he asked any of the pieces of men on the ground, they wouldn’t have been able to tell him why they were dead and not he. And yet, the silent thread that tied each fate together led him to a single, inescapable end:

“They didn’t want it. If you want life badly enough, you’ll find a way to keep it yours.”

A cold silence echoed across the frost-laden bodies. Erik turned and nodded, meekly. He turned back, gazing across the open landscape below, marred by fire and populated by the dead. Ivar watched him descend into the vale.

A bitter narrative grew in his mind, as Erik wandered through the field of dead soldiers: Erik was separated from them not by what he wanted. The men on the floor of the red earth and the man wading through them had shared their desire for life. It was the duration to exercise that diverged, but Ivar imagined that distance ever shrinking.

Men all want the same thing. Only a few want anything different, and that alone saves them.