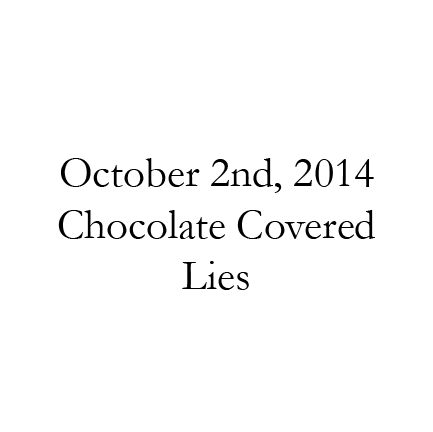 “This chocolate bar came all the way from Switzerland, you know.”

My daddy was always telling me silly things like that. Things that probably weren’t true. I wasn’t sure if I believed him or not. I mean, I know that little girls are supposed to probably believe their daddies, but I mean… Switzerland? Switzerland is like a thousand miles away. No way that chocolate bar was from Switzerland. So I just tried to be polite, and I told him: “Oh, wow.”

After a while, I wasn’t sure who ate less: the piggy bank, or us. Our dinners were always small, and I always felt a little hungry after, but Mommy said she didn’t like to eat too much. Daddy sort of agreed with her.

I was so used to eating those small dinners that when we went to the Thanksgiving dinner at church, I thought my belly was going to explode. They even had chocolate from Switzerland there too. The other kids were guzzling it like it was from the dollar store or something — you should have seen Tommy. He had his mouth full of candy and desserts the whole time.

“Hey!” I said. “That chocolate’s from Switzerland!”

They didn’t pay attention to me. Instead, they just plunged their hands back into the bowl of candy and grabbed more. One of the other girls looked at me and asked:

“Weird,” she said, studying the candy wrappers. “I thought it was leftover from Halloween, not from Switzerland.”

Even though I was so full I could’ve exploded any minute, I grabbed a piece of the chocolate from Switzerland and gave it a try. It wasn’t quite as fresh as I’d remembered it — it kinda did taste like it was leftover from Halloween, though.

We didn’t have any chocolate again for a while. I asked for some for Christmas, but mommy said that we probably wouldn’t get any. Our dinners started to get smaller and smaller. I didn’t mind it though — Christmas is that special time of year when everybody gets to ask for one thing, and so I wasn’t paying much attention to whether or not I was hungry after dinner. I was looking forward to Christmas and trying to spy on mommy. She was the one who was always in charge of getting everybody’s present. I was never a good enough spy to figure out if she was getting my present.

At the grocery store one day, we were walking back to the car with a couple bags of groceries. We always got the same stuff, and the cashier was always really helpful and let us pay with a stamp. But this time mommy forgot something on the way out.

She hurried into the store, and my mouth started to water over the candy. I dreamed about what kind I would get if the piggybank would just stop eating so many coins.

My eyes scanned the shelf, then stopped.

Swiss chocolate sat on the shelf. I reached for it.

“You like that kind of chocolate?” the grocery man asked me.

“I love chocolate from Switzerland,” I smiled.

“Switzerland? That chocolate’s from America.”

“Yep. Made in Pennsylvania.” The man grinned. He reached up to a top shelf and grabbed a different chocolate bar.

“This is Swiss chocolate,” he said. The bar that he held was different — the wrapper wasn’t colorful and it had tiny letters that were hard to see. It didn’t look anything like the other candy. Just then, mommy came back to pick me up.

We went back to the apartment, back home to make our tiny supper. I wondered about that Swiss chocolate, and which chocolate was really from Switzerland, and which wasn’t.

It didn’t really matter, though. That’s what I figured out.

On Christmas morning, daddy got me chocolate. The same kind that he said was from Switzerland.

“Thanks for the Switzerland chocolate, daddy.” I said. It tasted good, but it still had a little sourness to it, like it might have been left over from Halloween. But that didn’t matter. It really didn’t. Even if it was actually from Pennsylvania somewhere, I pretended it was from Switzerland, a thousand miles away. It didn’t matter if it was made right here in Fayetteville, or if it was made in South Carolina, or North Carolina, or at the beach, or even in Alabama. It was darn Swiss chocolate.

“All the way from Switzerland, right, daddy?”

“What’s wrong with your eyes, daddy?”

But I think he was lying about that, too.