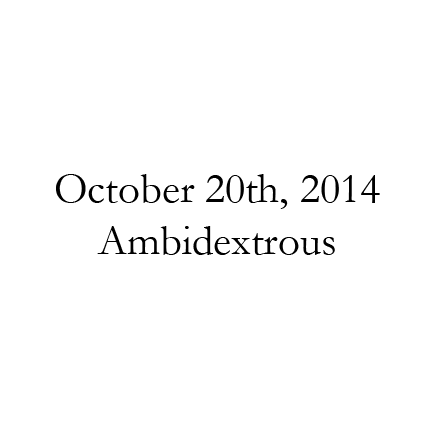 When you moved to L.A., she’d just broken up with that one guy, the Herculean one who attended West Point. And while you were gone, she dated the lead singer of one of those screaming rock bands. When you got back, you realized that if the two of you started dating, you would be the lamest boyfriend she’d ever had.

But that didn’t bother you, and it hadn’t, for the longest time. When you moved to L.A., sun-blessed California girls occupied your mind more than a quirky girl from your hometown.

You returned from L.A. after a measly nine-month attempt at putting down roots there. The sprawl of southern California had challenged you. You landed back in your hometown, going back to your quiet little neighborhood outside of Seattle, feeling determination laced with insecurity. You didn’t expect anyone to call you up and ask you about L.A., or why you decided to move back. You didn’t expect anyone to want to “catch up,”, or hear about your missing months after a long silence. But she did.

You invited her over for dinner, mainly because you didn’t have the money to go out, and because she told you that you should. You hadn’t seen her in several months, and missed out on a couple of things that would probably come back to bite you.

Your culinary skills had degraded while you were in L.A., and having her over for dinner provided the perfect chance to showcase your lack of talent. But she didn’t seem to mind. The two of you sat down to eat, content; uncertain, but grateful for the other.

Her right hand was wrapped in a cast, and she quickly tried to explain it away. That was the first thing you missed while you were in L.A.

While you were chasing something in the City of Angels, she’d gotten in an accident at her boyfriend’s rock concert and smashed her right hand.

“It’s not actually that bad,” she said, but you sensed that the words were more for herself than for you.

“How did you write?” you asked, and she tried so very hard to deflect her insecurity with a cheerful smile. She asked you for a pen and a piece of paper. You disappeared into your room, searching for the nicest piece of stationery you could find. You returned to the table a little ashamed, and handed her the only pad of paper you could find: decorated with bright pink cartoon characters.

“Where did this come from?” she asked, as you handed her the pad and pencil.

“It was left over from a film shoot in L.A.”

She smiled, and wrapped her fingers around the pencil. The fingers on her left hand failed to dance to the orchestration of the other, but lacked none of its determination. She scrawled out a clumsy phrase:

She looked up at you. She smiled much in the same way that she’d written the letters: with determination, laced with insecurity.

You started to wonder what else you’d missed while you were gone, but she interrupted your thoughts with the answer to a question you were too distracted to ask:

“Right after it happened, my mom told me that I used to be left-handed, when I was really young. I didn’t believe her, but I tried it anyway.”

She lowered her eyes and studied the cast, a rigid mask around her delicate fingers.

“I tried really hard to get back into it, to being left-handed, I mean. But it doesn’t work that way, I don’t think. You can’t just force yourself to be left-handed. Or right-handed, for that matter.”

With determination, laced with insecurity.