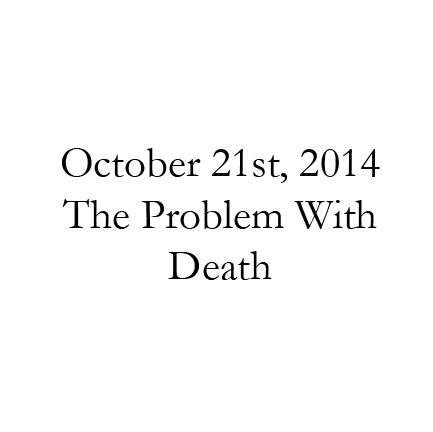 I’d never really given death much thought. It’s always been a distant echo in the darkness that has never shown me its weight. Like the slow roll of the credits at the disappointing end to an action movie that should have ended an hour ago. (The only problem with that is that the popular movies all have sequels now.)

It wasn’t until I met John in Mrs. Hardison’s horrendous 5th grade chemistry class that I realized that some people see death as non-existence, and not as a gap between Hollywood sequels. Whenever someone mentioned God, or Jesus, or praying, John proudly yet quietly declared his atheism.

“So what happens when you die?” a curious girl asked him during recess.

“He goes to hell,” someone blurted.

The brash chubby kid who’d condemned John to hell just laughed and spat a couple more antagonistic words. He stepped in John’s way and challenged him with a jumbled mess of religious perspectives on death.

John ran off, wiping his face and trying really hard to seem like he wasn’t crying.

I never considered that there might not be something else. Something after death, I mean. It might have crossed my mind once or twice, but I never had a reason to wade through the implications of what it might mean to not exist.

And then, one day, I did. Long after the 5th grade debacle, after Mrs. Hardison’s horrendous chemistry class, in the middle of the night, I woke up and wandered out of my room, half-awake or half-asleep. I meandered through the dark, and after bumping into the hallway wall, I found the bathroom and flipped on the light. As I waited, relieving myself, my mind wandered through partial consciousness, and stumbled into a midnight revelation, as minds sometimes can in the middle of the night. My mind stubbed its toe on death, and I started to examine what that might actually mean.

I thought about what it might feel like to know that you’re about to die. To know that it was a pretty decent run, and now it was over, and you’d never be around to see the sequel. My southern, religious roots scraped the weak ontological soil, but nothing held, and I found myself collapsing.

I woke up the next morning on the bathroom floor, holding on for dear life, afraid to not exist.

Part of me wants to remember the comfortable southern mentality of death as an answer to a question. I’m not sure what the question is, but I always thought that dying and discovering the answer would be abominably exhilarating.

The other part of me knows that John might be right. The only problem with that is that when I die, I won’t be dead.