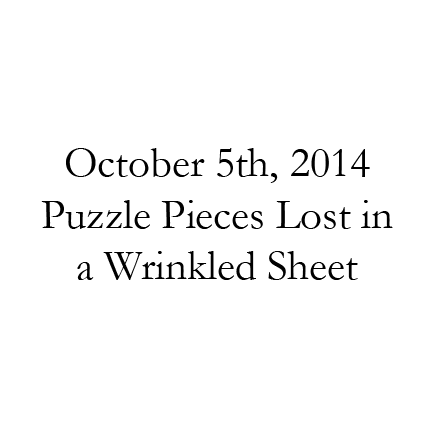 I hate it when I’m frustrated as hell. That may sound like a blatantly obvious thing to say, but it’s the truth. I really do. There are plenty of things pissing me off at the moment, and a damn good number of things that I can’t do anything about. They’re like lame ducks, staring me in the face, laughing at me. That would all be fine and dandy, except my hands are tied behind my back. And trust me, nothing is worse than being laughed at by lame ducks while having your hands tied behind your back. Except maybe having words fixed on the tip of your tongue.

Things that I have no control over don’t frustrate me. That’s for other people to worry about. I get pissed off when I have every ability to change a situation, but have to wait. Usually it’s something terrifyingly mundane that’s in my way, like a delayed flight, a traffic jam, or the missing lid to a box of puzzle pieces.

I want to tell Cassie for the very first time that I love her, but the only right way to do that is face to face. Trust me, as much as the world tries to make communication easy and accessible, I find it to be ontologically illegal to tell someone I love you for the first time via text message.

She doesn’t expect it from me, and to be quite honest, I’m not sure I expect it from me, either. The last time I saw her was a week ago, right before she left the country. Even then, I might have known that I wouldn’t get the chance to tell her, because I had the feeling of my heart being twisted up like a wrinkled bedsheet the moment I saw her. The words waited at the tip of my tongue like puzzle pieces waiting to be put in the right place. But I was never good at puzzles, even when I looked at the box.

I’ve never liked going-away parties. I think they’re supposed to offer a nice chance for everyone to say goodbye, but they never do that for me. I’m always left awkwardly waiting in the corner, thinking far too hard about the last thing I would want to say to someone, and how they might remember me.

So when Cassie’s crowd of friends surrounded her to offer final goodbyes, and to tell her how much they would miss her, I lined up to do the same. The words on my tongue grew heavier and heavier, and I realized that if I didn’t say them now, I’d have to stuff them in my pockets and carry them around with me for months before I had another chance.

But instead of telling her the truth, I just looked her in the eyes and said, “Goodbye.” She smiled, and said goodbye as well. As I left her house, I peeled the words “I love you” from my tongue and stuffed them into my pockets like bricks, saving them for the next time I might see her again.

Her friends continually asked her when she was coming back, and she gave them all the same answer: she didn’t know. I thought she might offer me a different answer, a custom reply, or at least a hint. But I’m not sure she could have given one to herself if she’d wanted it.

So I wait, and carry the heavy words around with me, everywhere I go, because I was never good at puzzles, even when I looked at the box.