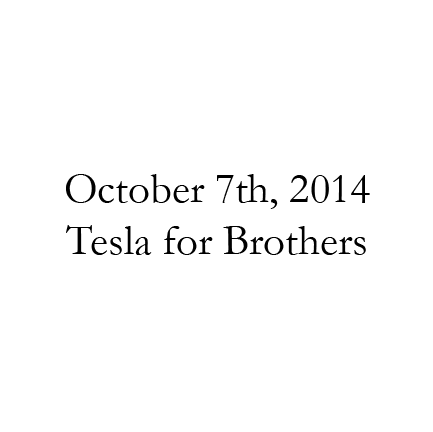 My brother Jeffrey brought an inimitable habit with him to the breakfast table every morning. I was never sure where his feeble impersonation of a morning newscaster originated from, but nevertheless, he took it upon himself to become the source for current issues and breaking news. He announced the latest updates and insights from our kitchen table, behind his glass of orange juice and bowl of cereal.

This morning was a bit special, because he had an important headline, of which he was the original source. So after running down the headlines on the front page of USA Today, he went off-script and brought us the exclusive story:

“Breaking News: Jeffrey will be going to the local Department of Motor Vehicles today to acquire his Limited Learner Driver’s License. With a full six months of driving experience, Jeffrey is — ”

Normally, I would jump in and plug a sarcastic comment at the end of my brother’s annoying announcement, something like: “Thanks for the tip, I’ll be sure to warn everyone that you’ll be on the roads and that they should run for cover.” But I hadn’t had my coffee yet. My parents say I’m too young for coffee, which is ridiculous, because if I’m old enough to be going to college next fall, then I’m sure as hell old enough for coffee. I get my coffee on the way to school, right after Jeffrey’s home-brewed newscast.

But Jeffrey’s announcement was accurate. My mom took him to the DMV that afternoon. He passed the driving test and the written test, smiled for his picture, and lied about his height. The sour lady that works at the DMV handed him his freshly minted pass to freedom, and he stepped out into the parking lot of newfound liberty.

He discovered, though, that his declaration of independence was timed with a sense of existential irony, when he scanned the headlines the next morning. He disseminated the first couple of announcements in his usual fashion, and I let them slide through my un-caffeinated mind until his announcer voice faded. You can always tell when something legitimately excites Jeffrey, because his impersonation fades, and his real voice comes through.

“Whoa!” he said, shaking the news character away. “Check it out! Elon Musk is making an automated car! It’ll be able to navigate anywhere you want. Ha! Just type it in and it’ll go. That’s pretty sweet.” He studied the newspaper, grinning to himself. Without coffee, my mind lagged behind, but I watched him keenly as the article pulled him in. His grin dissipated and was replaced by intent and thoughtful concentration. Only after he had read the article twice over did he finally lower the paper and mutter something to himself:

“Elon. Elon Musk. Like a musk ox. Damn. Elon Musk is a cool guy. He’s teaching computers to drive, and I can barely drive myself.”

I might have given that some more thought, but we rushed out the door immediately after the newscast ended, and once I got my coffee, my mind was spinning too fast to revert back to the morning’s headlines. The breakfast-table broadcasts were growing exceedingly annoying, but it was Friday, and Jeffrey already had plans to exercise his newfound freedom at a party, which meant a small chance of receiving a morning update. I spent the day basking in the joy of not having a younger brother clinging to my side, asking to borrow my keys, or reporting at my breakfast table. But by that evening, Jeffrey had shattered my blissful feeling of being obligation-free.

“Travis, you gotta come to this party tonight! It’s gonna be rad. Come on.”

I didn’t even have to ask where this party was being held, or who was going to be there. I already knew I didn’t want to go. And I told that to Jeffrey. He tried once more to persuade me, but I shut him down. He foolishly tried again, and I made him wish that he hadn’t.

“Fuck, no. I’m not going to that party. You got your license, take the car and drive yourself.”

“Fine,” he grumbled, trying to pretend that he didn’t care. “It was just an invitation. If you’d rather sit around and be lame, that’s up to you.”

He grabbed the keys to the car — my car — and headed out the door, leaving behind something that looked a lot like admiration. It was a specific kind of admiration though: The kind of admiration that a younger brother looks up to an older brother with. It’d been a while since I’d seen it, but I guessed that he’d put it to good use recently, since I was leaving for college in a couple of months. I wondered, for a moment, if he would come back and get it and take it with him, but he was going out with his friends, and probably didn’t see an urgent use for it, given my harsh rejection.

I figured I might have been a little too blunt with him. Maybe I shouldn’t have used the F-word. But I didn’t want to go to that party, and joining my younger brother was not enough of a motivation to attend. I pocketed the admiration he’d left at home, and wondered if he’d use it again soon.

A phone call came at 11:34 p.m. that evening, and I realized that my brother would probably not be using the admiration he’d left at home anytime soon. It was the only thing I brought with me when we rushed out the door to the hospital.

The clock told me it was 1:42 a.m., but it could have said anything and it wouldn’t made a difference. We entered the room with hushed voices and a scraping fear.

It was a miracle that he survived, and I wondered if there was some kind of patron saint of the DMV that followed new drivers around for the first week of their independence. My mother stroked his forehead, my father held his hand. I just stood back, afraid, uncertain, and ashamed. I pulled out the bundle of admiration that he’d left, and handed it right back to him, because I’d never seen anyone survive a car accident like that. My brother was too rowdy for a DMV angel to follow him around, which means that he survived completely on his own.

The clock tried to convince me that it was 3:31 a.m., and despite my skepticism, I decided to try and find a place to sleep. I held his hand, right before I left the room for the night.

I tried to imagine all the breakfast-table news announcements I’d miss the next morning: If Tesla had just announced an automated car, then maybe the next announcement would be a solution for everything else that we operate so poorly. It’s only a matter of time before they teach a computer how to be an older brother — one who cares enough about his younger brother to make sure he gets home safely. Or a younger brother — one who won’t read you the headlines in the morning unless you ask. Once they automate that, they’ll automate everything, and what will they need any of us for?

As I left the room, I felt a shimmer of confidence. They can try to automate everything. Big brothers, little brothers, self-driving cars, self-cleaning floors, renewable light bulbs, and self-charging phones. Everyone will have them, except for my brother and me. I’ll still struggle to keep my eyes open, because I haven’t had coffee yet, and my brother will still announce the headlines at the breakfast table, regardless of how many times I tell him not to.