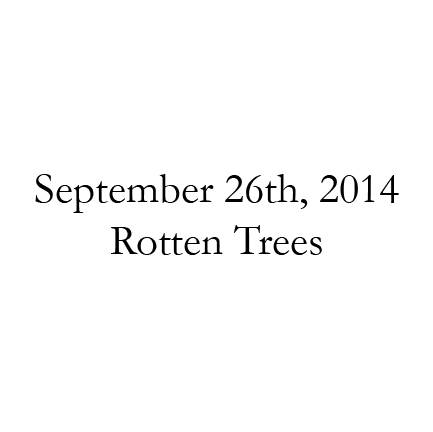 She cried when her husband left her — not because she loved her husband, but because he didn’t take Gregory with him. She’d always feared that he would leave. Ever since the day they got married, in that old Chapel on Lassiter Road, the one with the twisted oak tree outside, she never felt comfortable away from him. It wasn’t until Gregory was born that she discovered why.

Retarded. That was what he called Gregory. And whenever he did, she corrected him and told him that the term was challenged, not retarded, but he either didn’t care or he enjoyed the offense — she wasn’t sure which.

He left on a hot summer morning in August. The air stagnated and hung patently in their musty faded home, like a dead weight on her mind. When she realized he wasn’t coming back that evening, she wandered away from the tiny apartment, leaving Gregory alone in the house. She walked outside, and continued until she found herself on Lassiter. The afternoon heat slowed, but by the time she reached the chapel, a layer of sweat wrapped tightly to her skin. She stepped to the large oak door of the chapel, but it was locked.

A cold, calm rage grew inside her, but the chapel just stood, torpid and still in the warmth. Her hands scraped the ground, grabbed a rock, and cast it into one of the stained glass windows. The colored pieces fell, over the ground, but offered her no comfort. She turned away, tears dropping from her eyes. She walked to the old, twisted oak tree and sat below it in the soft earth. Above her, in the curling limbs, a small flock of black birds rustled their dry feathers, and deserted the tree.

She returned to the house the next morning to find Gregory crying in his bed. She lifted his deformed body up into her arms and sat in front of the large, expansive window in the kitchen in her tiny apartment. The window overlooked the fallow neighborhood common: an unused picnic shelter, a dilapidated jungle gym, and a swing set missing one swing. They both watched as the only movement in the common for hours came from a couple of birds.

That was how things continued, for the most part, for a long time. She held Gregory with a bitter taste of his innocence left in her mind, leftover from her husband’s abandonment. Gregory grew up, in the way that a challenged child can. She told herself that she would work hard — hard enough to hire someone that might be able to work with Gregory. But her variable self-control impeded on her goals for saving money.

She worked two jobs, and fell asleep in the afternoon, immediately after returning home from her last shift. And yet, she never could afford someone to take care of Gregory. Instead, she left him at home, in the kitchen in front of the window, and he grew to crying for hours every day, until she returned home.

Finally, after coming home from a long shift at work, she lumbered to the kitchen, ignoring Gregory as he tried to sway his chair to see her. The chair didn’t move — Gregory’s swaying motion failed to move it, but his hand touched her. She let their eyes lock.

She took him outside, wheeling his chair to the same old, rusty station wagon that had brought him home from the hospital. Gregory chirped and awed at the bright sky as she hugged his frail body and struggled uncomfortably to position him into the car. His atrophied legs dangled in the back seat, and she paused to look at him. She hated the way he looked, and loved him at the same time. After a moment, Gregory’s expression twisted to one of concern or confusion, and she shut the door and drove to the chapel.

The window that she’d shattered nearly eight years before had been replaced, and a new parking lot replaced the old sheet of cracking asphalt. She wheeled Gregory toward the oak tree, and they paused underneath the branches. Gregory swayed and reached his fingers upward with excitement.

She studied the tree, and realized that it wasn’t the same, either. Nothing had escaped the decay of time. She pulled Gregory out of the chair, and lay him down on the ground, where she joined him.

They looked up at the silhouette of the tree against the sky. Her eyes caught something distinct, and hidden — a bird, like the ones that she’d seen there before. It landed on a twig, but the twig snapped. The bird tried again on a larger branch, but that branch too crumbled beneath its weight. She pointed to the bird, and Gregory cooed and awed as the bird scrambled to find a permanent perch. She lay on her back for several more minutes, and a tear trickled from her eyes.

The branches of the twisted oak tree rotted slowly, and again, she pointed upward to the sky.