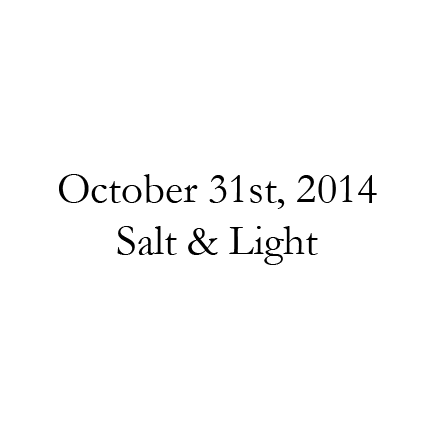 You shuddered and braced yourself for the shattering crash after you dropped your religion. The sound of a foundation breaking is enough to deafen you for a very long time. But your beliefs shredded away and dissolved for just as long, like salt in water. And that salt tainted everything you drank, bittering your mouth and tightening your tongue. So, instead of looking at the ground, at all of the pieces that your parents had so carefully molded and constructed, you found something else to pour yourself into.

The medical profession extracted as much out of you as your religion did, but maybe it tasted different. Maybe the short, tainted acridity of lurid hospitals and bored patients paled in comparison to the false borders and iron limits of dogma. Regardless of your fulfillment in either of them, your white coat seemed to be the only source of comfort once your belief in religion shattered.

You can’t even remember her first appointment. Your records say it was a day in early June, which makes you think about how uncomfortable it must have been for her to wear the massive, twisting back brace in the humid summer heat. And even though you remember examining a patient with her debilitating degree of scoliosis, your memory of your first meeting remains absent in your mind.

Her second appointment imprinted itself on your mind, not like a print in clay, but like a scrape on flesh. That’s the one that you remember. You ducked when she swung the word “God” in your direction, and dodged when she used the word “healing.” Not because you were afraid, but because you knew the damage that those words drew.

At her last appointment, like grains of salt she slipped through your fingers. When she showed you her back for the last time, the only thing that felt twisted were your own expectations.

Healing touches one injury, but you decided early on that far too often it causes many more. Her back straightened, thanks to “Jesus,” she said. She was healed, and no explanation accompanied her.

In the corner of your mind, you hoped that she was right. Not for her sake. But for yours.

You would have surrendered your very own spine to the ravages of her scoliosis if you’d just had a way to ignore her bizarre, anomalous healing. She attributed it to that thing she called “Jesus,” a word that rung out bitter and foreign, yet so close to you that it made you shiver.

Time slid away. The velocity of those memories increased, but the scrape on your mind remained. Months later, you felt comfortable saying that you’d forgotten her, and sometimes you believed that.

Your phone rang as you walked out the office to your car. You don’t usually answer your phone when you’re going somewhere. You like to be focused. You like to keep your mind on where you’re going, not on where you’ve been. But you answered it. I’m not sure why, and I have a feeling that you didn’t know, either.

She said her name was Maggie, and that she was a friend of a patient you’d treated about a year ago. I have no doubt that you immediately sifted through your fading memory back to all the patients you’d ever cared for. And yet, a heavy pull in your heart made you certain of whom it was.

“Um, can I ask your relation? Why do you need to know about her condition?”

That was your nice way of saying I’m not telling you fucking anything.

“It’s…” There was a discomforted sigh. “She said it was okay to call you. She said I could ask you anything I wanted.”

You paused, because the practice restricted disclosing that kind of information. You tried to stall, or defer, or deflect, just like you’d always done whenever you were faced with a confrontation. But you caught yourself, and you hate it when you catch yourself doing that.

“Well, I’m really sorry, but I’m not allowed to give you any information about—”

“I already know about her!” The woman snapped. “I was her fucking best friend, why won’t you just tell me what the fuck happened to her?”

A thick silence swelled between the phones. Maggie was the first to offer a solution.

“Just tell me how she got healed.”

A muted sound quenched through the static, like a surrender, or an incomplete forgiveness.

All of the false borders and iron limits afflicted your thoughts, worse than scoliosis ever had afflicted anyone. But you could not force yourself to lie to her, as hard as you tried.

You once again considered ways to escape silence, but Maggie interrupted your kinetic thoughts with words which none of any other tasted more bitter to your mind.

“Thank you for answering my questions.”

You both said goodbye, and she hung up, but you didn’t. You never ended the call. You just stepped into your car and sat in the driver’s seat in silence. The bitter taste of what you’d always thought to be the taste of mistruth flooded your senses––except your eyes. Light filled your eyes, and you sat in your car in the empty lot, until the sun went down.

And as the bitter taste marred your nostrils, and filled your tongue, and the waning light dimmed, something broken, yet yearning for attention, clawed at the bottom of your feet. You looked around, to see that the pieces of your faith had been there this whole time.