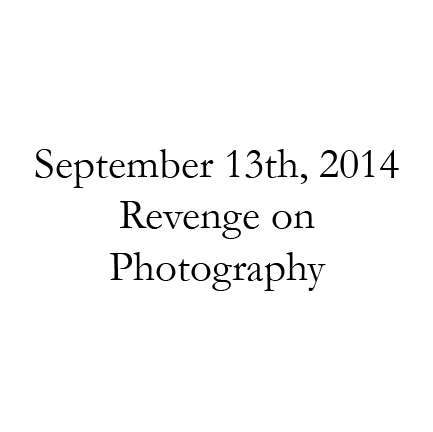 The spare room in my family’s house: If you can imagine, for a moment, a room packed to the brim with old film negatives. These are my father’s film negatives, starting from the moment he first picked up a camera at the age of eleven, to just last November, when he last loaded negatives into a new shoebox and put it on the newly installed shelf.

My first picture: It was digital. (I admit that like I’m sitting in a confession booth in a Catholic church.) The first photograph I took was with a digital camera. My dad would have been appalled, I know, but I’ve been able to keep that secret safe for a long time, and I no longer even have the chance to reveal it. It was on Christmas morning, and my grandmother gave me one of those cheap 3.0 megapixel digital cameras. She didn’t know what she was doing by giving it to me, the son of a film camera purist, but then again, I didn’t know what I was doing with the camera either, so it balanced out, I suppose. The digital camera granted me twenty-seven blurry images before it fell silent.

The subjects of my first picture: My sister, Tabitha, my little brother, Jordan, my grandmother, and my grandfather, smiling on my grandparent’s old faded couch on Christmas morning. Everything about this picture is right––right in a blurry, poorly lit way. It’s the same way that a bad movie can be good––the ones that don’t try to be something else, but just accept what they are and embrace it. That photo was terrible. The lighting was atrocious and blown out, and my sibling’s eyes glow red. But it didn’t matter. We were happy, and it was Christmas. This is what I remember. This is what it was.

My memory of that Christmas morning: It started out the way every Christmas morning should. Way too early, with us running down the stairs in a furious craze, racing toward the piles of presents under the fake tree. Grandparents have a way of supplying their grandchildren’s every wish, and to be honest, that’s what I remember.

What actually happened on Christmas morning: My mom gathered my siblings and me together that afternoon, after we’d opened our presents and eaten way too much candy, and after we’d started to grow tired of some of our newly acquired toys. She sat us down, and explained to us that things were going to change. She told us that Dad was going to be going to the doctor more often, because they wanted to make sure that he was okay.

The location of my father on Christmas morning: My siblings and I were led to believe that he and my mother were spending the holiday in a cabin in the mountains of Tennessee. But they weren’t. They spent Christmas Eve in a hospital room, waiting to hear results from a doctor who was only working on Christmas Eve because he didn’t have to work on Thanksgiving that year.

What I did to try to ignore the fear that I might lose my dad: I photographed. A lot. I didn’t use that crappy digital camera. I got rid of that pretty quickly. I snuck into my dad’s room when I knew my mom wouldn’t catch me, and I borrowed his film camera.

Why I took pictures: Snapping the shutter was a drug for me. Every single frame and composition was a hit that let me shape the world like Play-Doh, soft and moldable. Every single damn photograph was a way of looking at the world and saying, “Fuck you, I frame the world the way I fucking want.”

How I was wrong: Framing a photograph gives a memory, but unfortunately, memory isn’t reality, in the same way that a Christmas present isn’t happiness.

How I discovered I was wrong: My dad passed away. On May 21st, my dad passed away, and I realized that I can take as many pictures as I want, but they won’t change what really happens. They only change the way I remember them.

What photography promised me: It promised me memories that were perfectly curated and selected. Every time I walked into our spare room, I got a glimpse of what it meant to curate memory. It wasn’t a mental thing. It was a physical process of focusing, framing, and pressing the shutter. As long as I did those three things, I’d never have to remember a single thing that I didn’t want to remember.

What I did to get revenge on photography for deceiving me: I walked into the spare room, three weeks after my dad passed away, and I took his negatives, and put them into a trash bag, and took them outside, and burnt them.