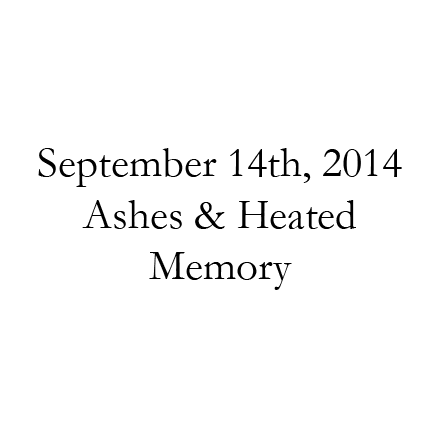 I stepped out of my car into the gravel lot. It didn’t used to be a gravel lot. I felt like I could still smell the smoke and the ash, but that might have been my imagination.

The lot was vast and unwelcoming, nothing like it used to be, but that’s what fire does. I stepped across the gravel, studying the ground for some kind of remnant of the past, but there wasn’t any. The construction team that had followed the team of firefighters had done a good job of cleaning up any sign of the house.

I remember when I first moved in––my dad carried me on his shoulders and asked me what I thought. The house seemed so large to me as a six-year-old. So large and looming, with an endless supply of rooms and hallways.

I stepped further into the lot, past a small cropping of weeds and bushes. A healthy wreath of hedges and shrubs had framed the house, giving it a frightening laurel of flames when the house finally caught fire. My sister and I played hide and seek in them before they were devoured.

A bird rose from the shriveled trees at the edge of the lot. There used to be a tree over there––A Bradford pear tree. My dad said they were weak and couldn’t even hold their own weight, so he had it chopped down and removed before it fell on its own. I remember crying as I watched the workers pull the branches down and shred the pieces with their truck. I might have cried even more than when the house went down, but I don’t know why.

I circled the lot, one last time. I hadn’t visited in a while––a couple of years, maybe. But honestly I couldn’t remember. I never knew what I was looking for when I showed up. Maybe just some memories. Maybe just that faint smell of smoke. Maybe just the distant feeling of comfort that I associated with being six years old. Maybe the hope that there would be something mixed into the gravel, left by one of the firefighters, or missed by the construction workers.

I walked back toward my car and saw some kids at the other end of the lot, where a little bit of asphalt peeked through the gravel. The kids kicked their skateboards around and threw rocks at each other. I paused as I reached my car.

“I’m looking for something.”

The words escaped my lips, and the kids laughed to each other. I felt strangely foolish, like I was suddenly the one who was trespassing, not them. I opened the door to my car.

I slammed the door of my car, and rushed off of the gravel lot. I wouldn’t have known how to answer if I had stayed any longer. As I drove away, I scraped the floor of my mind, trying to find what I was looking for. But slowly, I realized that maybe I wasn’t looking for something I missed, and that instead, I’d returned to leave something there. The stain of a memory of a burning home was still ingrained in my head. The raging heat from the fire still warmed my skin. There was a gaping burn in my childhood. And I swear I can still smell the smoke and the ash, but that might be my imagination.